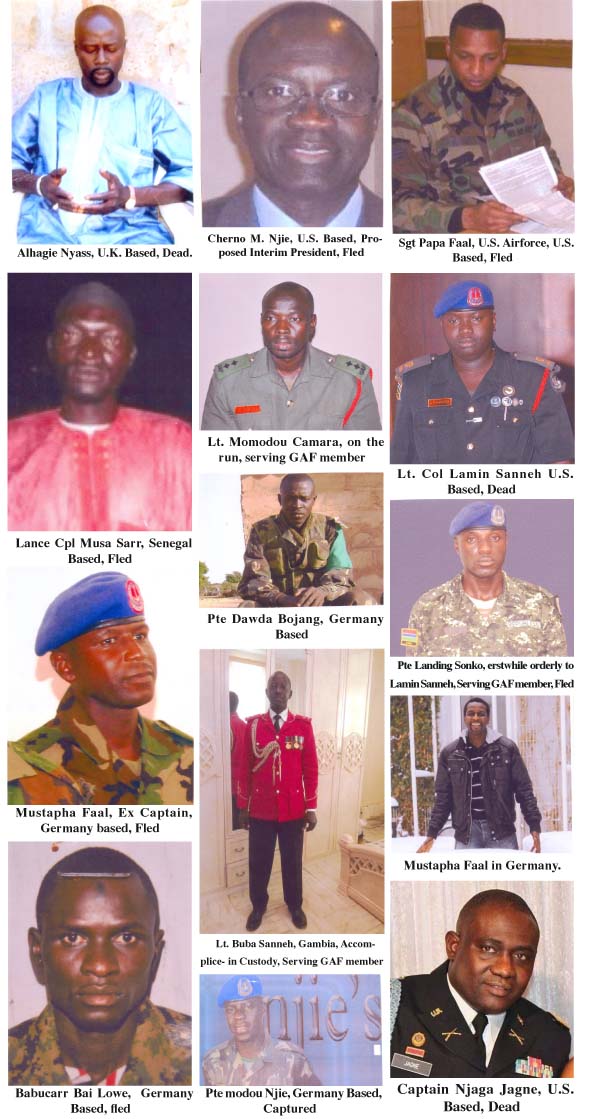 The Gambian government on Wednesday issued a statement on the “Terrorist Attack” of 30 December 2014, explaining the plot and naming those behind it. A full account of the plot follows, with photos of the attackers:

On Tuesday, 30th December, 2014, at 2am GMT, the State House was attacked by a well-equipped, well-funded group of Gambian terrorists living in the U.S.A., U.K., Germany and Senegal with support from their collaborators abroad with sophisticated automatic machine guns and assault rifles.

Five of these attackers launched their assault from the main gate of the State House by the Albert Market while the three others attempted to enter through the rear gate by Marina Parade.

The leader of the attackers was Lamin Sanneh (codename ‘Gibia’), a former Lieutenant Colonel of the Gambia Armed Forces and former Commander of the State Guards Battalion who was dismissed from the GAF and fled to Senegal and then to the U.S.

During the exchange of fire at the main gate, Sanneh and Jagne were killed. Lowe and Sonko escaped while Modou Njie was captured and is currently helping the intelligence and security services in their investigations. Glass windows and buildings pockmarked by bullets can be vividly seen by the gate.

The attackers from the rear gate included Musa Sarr, Ex-Lance Corporal of the Gambia Armed Forces (codename ‘Kampama’); retired US Army Sergeant Papa Faal and Alhagie Nyass, a former personnel of the defunct Gambia National Gendarmerie and one Dawda Bojang. Faal positioned a heavy machine gun by the entrance of the Accidents & Emergency Unit of the Edward Francis Small Teaching Hospital and repeatedly fired rounds at the gate. Nyass who attempted to ram his vehicle into the gate was shot dead. Dawda Bojang who was dressed in military uniform and body armour and positioned by a heavy machine gun was also killed. Musa Sarr and Papa Faal fled leaving behind their equipment and military attires.

Other members of the group were stationed at Brufut Heights, some 25 kilometres from Banjul, the capital city. They were:

• Cherno M Njie (codename ‘John’), the main sponsor of the attackers and proposed Interim Leader. He fled the country after the attack failed.

• Alhagie Saidy Barrow (codename ‘X’) was the coordinator of the group, responsible for logistics and clearing of their weapons and other gadgets from the seaport.

• Dawda Bojang, Ex-Private of Gambia Armed Forces who deserted in 2014

• Mustapha Faal is a Gambian resident in Germany. He deserted the group before the attack. His whereabouts are not known.

According to documents retrieved from the attackers, this group was to arrest and kill Service Chiefs and other individuals. The team was awaiting the taking over of the State House by the attackers and for the proposed leader, Cherno M. Njie to take over the reins of power. All the four escaped and Cherno M Njie and Papa Faal are facing legal charges in the United States.

After the confrontation and the defeat of the attackers by the security forces, alarge quantity of arms was retrieved which included:

• One (1) Night Vision Goggle, (although FBI reports that the group had two)

• Eleven sat Pro Communication devices. Theses gadgets were intended to be used for communication among themselves and to communicate to the outside world when they have destroyed the communication infrastructure in the country after failing to capture the State House.

It is clear from the documents retrieved from the attackers that this operation was well-planned. The documents revealed their intention to destroy key infrastructure including the Central Bank of the Gambia building, Denton Bridge, GAMTEL House and Kotu Power Station among other national assets.

While we continue to assess the situation and developments, the Government of The Gambia under the leadership of His Excellency, the President, Sheikh Professor Alhaji Dr. Yahya A.J.J Jammeh assures all citizens, residents and all true friends of The Gambia near and far, that the security and stability of the Republic of The Gambia will never be compromised.

The Gambia will continue to depend only on Allah, the Almighty for the peace, security and prosperity of our proud and dignified people.

The Government of The Gambia thanks all those countries that have expressed their genuine goodwill and solidarity with The Gambia in the wake of this terrorist attack. 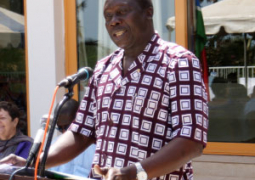 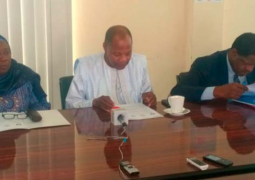