Chinaemelu Luke Ike, popularly known by his stage name De Zairo, an Afro beats Nigerian artiste, is staging tonight with foreign artistes including some Gambians at the Independence Stadium in Bakau.

His first performance with the crew was in June last year at Jokor Westfield; his love for music inspired him to come into showbiz as an artiste.

After splitting up with the crew, he still pursues his career as a solo artiste and from then until now he has released a few tracks, which include a track tribute “My Binta” following his girlfriend’s demise last year.

According to him, he has a great passion for music and saw that the Gambian music industry is trying, adding that he wants Gambians to know what they have got when it comes to music.

“I want to change many things in the Gambian music industry, the language, flow, rythm and all that good music entails.”

He added that he loves the country and the way they do things, and the way the music industry is moving, but a lot has to be done to harness the industry.

De Zairo emphasised that he is in the music industry for life; that he is ready to do music, and he is also here in The Gambia not to do only music, but to get Gambian music to a higher level.

He urged all Gambians to come out in their large numbers to see him play in his first public performance on stage.

“It will be different, and I promise that Gambians will see a different De Zairo on stage.”

Olympic Day to be celebrated today 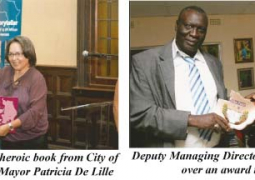