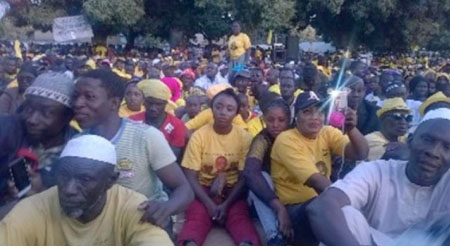 The United Democratic Party (UDP), over the weekend held a massive political rally in Brikama in the West Coast Region.

Addressing party supporters, Ousainou Darboe, the secretary general and party leader, paid tribute to Gambian women for the unflinching support they have been rendering to the party for the past years particularly in difficult times.

“During our clash with the security forces in Basse, our women supporters were very adamant and supporting the cause and values of the party. They stood to defend the party in ensuring that the party don’t die,” Darboe said.

According to him, despite harassments they have encountered with the police during a clash in Basse, the women leaders of the party stood firm and supported the ideals of the party. He added that women have done everything within their limits in ensuring that the party achieves it desired goals.

He thanked those that organised the Brikama political rally, saying “we are entrusting the party to Gambian women. Today, it’s you the Gambian women that can remove us from this suffering. Despite what the party wants to do in the country, but if you don’t give the party your votes we will just have the aim but we will not do anything.”

“If that does not happen, then the country’s agriculture will not be developed to the way it supposed to be,” Mr. Darboe told his supporters.