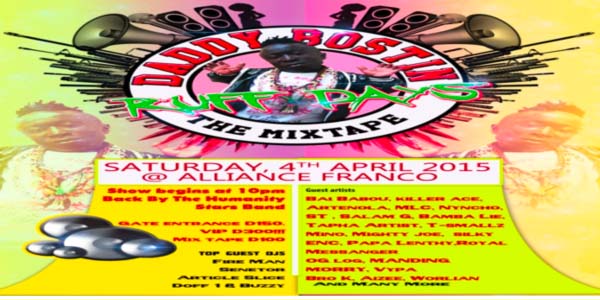 Sulayman Jammeh alias Daddy Bostin, a Gambian reggae dancehall artiste, residing in Pipeline is on the preparations to release a debut mix tape on 4 April 2015 at Alliance Française.

The 14 tracks mix tape was mastered by Minka Records and some of its promotional tracks are ruffdays, duppy b,hallehyee and two featuring songs namely, Enjoy life ft. Baba lie and Blow ft king Alagie from Ziguinchor .

Daddy Boston briefly disclosed to journalist that the idea of the ruff days mix tape is to sensitize youths and encourage them to maintain the hard work and avoid suicidal behaviours in the society.

“I am a peace ambassador and a good citizen of the nation as well. I was invited to participate in Sindola Festival in Ziguinchorr in 2013 alongside Fafadi, at a peace concert which was organized by MFDCSpeaker aka Abdou Elinking Jatta.”