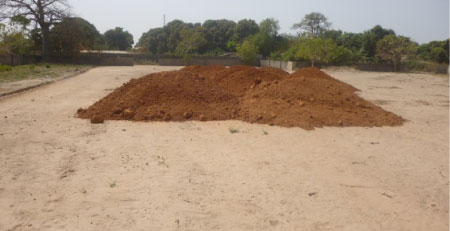 The Gambia Tennis Association (GTA) has kick-started the construction of the association’s tennis courts in Bakau, expected to be built in line with international standard.

During a recent conducted tour of the construction site, located behind the National Youth Service Scheme building, the secretary general of the association, Mr Phillips, said the project was long overdue as it was scheduled to have been done a long time ago, but for lack of funding.

He said the project consists of seven courts, including necessary facilities, to raise it to international standard, but at the moment they are working on only four courts for the first phase. This is because they are doing a lot of work on the land, which include clearing the land, cutting down trees, removing the top layer of the soil and back-filling it with stones, “which is very difficult” and time consuming.

The project will have a Club House, office, conference room, VIP lounge, swimming pool and other facilities similar to international tennis courts, so that The Gambia can also host international matches.

It would be recalled that on 29 December 2011 the Ministry of Youth and Sports presented a cheque for D150,000 to the association as part of its contribution towards the construction of the tennis courts.

The cheque was presented by the chairman of the National Sports Council, Sulaiman Bunn Njie on behalf of the Ministry of Youth and Sports at a ceremony held at the Friendship Hotel in Bakau.

The president of the Gambia Tennis Association (GTA), Sheriff Jammeh, who received the cheque on the occasion, said the International Tennis Federation - the parent body responsible for tennis globally - has also pledged to provide US$20,000 in the form of a catalyst fund by installment of US$5,000, after verification that there is an output from the government to start the foundation.