Banjul, Dec. 29.- With a Declaration of support for its Revolution, its historical leaders and its current president Miguel Diaz-Canel, the Cuban Medical Brigade (BMC) in Gambia celebrated on Saturday the 61 Years of Victories of the town of La Mayor of the Antilles.

The celebration at the Embassy of Cuba in Banjul began with a political-cultural act, in the presence of the Minister of Health of this African nation, Doctor Ahmadou Lamin Samateh, and later Foreign Minister Mamadou Tangara, and the head of the Commission of Health of the National Assembly, Ousman Sillah, among other personalities.

In addition to all the members of the BMC, their boss Anaris Marta Odio, and the ambassador Rubén G. Abelenda, were present young Gambians graduated in Cuba, and friends of Solidarity.

In the activity, a group of BMC members were recognized for their outstanding work in healing and saving lives in this small country in western Africa, and for the defense of the Cuban Revolution in social networks.

When speaking in the initial act, the Minister of Health had words of praise for our peaceful Army of White Robes of Cuba in the Gambia, while thanking them for their human work.

For his part, the ambassador of the Caribbean nation highlighted the support provided to the BMC by the Gambian authorities, and especially by the head of Health.

Similarly, the diplomat highlighted the excellent relations that currently exist between the two sister countries, which in 2019 turned 40 years of existence, and thanked Foreign Minister Tangara for his friendship with Cuba, and his presence in the activity.

In the celebration there were no shortage of humor, poetry, music, dance and the typical culinary of the Greater Antilles, but above all a lot of joy for the new anniversary of the Cuban Revolution and the advent of 2020. 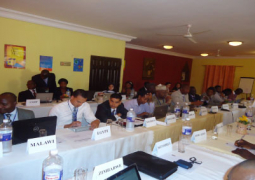