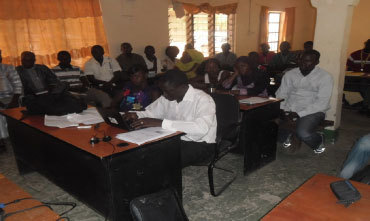 Officers-in-charge, Head of Reproductive and Child Health Clinics, and Community Health Nurses (CHN), in partnership with Midwifery Department of SEN School and Bansang Hospital in CRR health workers during the weekend held a quarterly in-services meeting, at the Regional Health Team conference hall in Bansang in the Upper Fulladu West District in CRR South.

The convergence was meant to bring health workers across the region, to discuss issues surrounding the specific reproductive and health-related issues, and to come up with recommendations as to how to improve the system, for effective service delivery.

Speaking at the meeting, Alh. Modou Sowe, the Regional Vector Officer expressed appreciation for being associated with the event, on behalf of the Regional Director of Health Services, Mr. Jankoba Jabbie. As he puts it, this is his first time to attend such a meeting in CRR.

He urged participants to seriously concentrate on the subject matter (presentation of regional health statistics data for2012, and lectures on how to manage haemorrhagesduring pregnancy and child birth, as well as launching of the family planning defaulters tools developed and piloted for the village health services in CRR.)

In a power point presentation, Mr. Ebba Secka, the Regional Principal Nursing Officer for CRR (RPNO-CRR), said basic data and statistics are at the core of all health systems, without which, he noted, it would be impossible to analyse evidences and extract action-oriented knowledge for decision-making.

While highlighting that some of the strengths include the monthly in-services and supervisory visits, he said, implementation of activities are most often planned.

“There are 9 government health facilities in all districts, except Niamina West and Upper Saloum, 8 village clinics, among others. Challenges: in adequate number of midwives as compared to the population (1 midwife per14,, 720 population), improvement as well needed in supplies ofdrugs and other medical consumable as the population and health facilities are increasing,” he stated.

He made mention of the following recommendations: provide more midwives to meet the needs of the population; increase drug supplies to meet the needs of increasing population; increase fuel allocation to regions to enable them conduct efficient and effective supervision of all facilities within the jurisdiction and provide perimeter fencing for Brikamaba and Dankunku health centre.

For his part, Arfang D Faye, the Head of Midwifery programme at the School Nursing in Bansang talked about obstetric haemorrhage, ante partum and primary postpartum, among others.

On symptoms of the following diseases: hypovolaemia or hypovolaemic shock tachycardia and weak pulse, hypertension, cold and sweaty skin, confusion and restlessness, reduced consciousness, reduced urine output, he said, one must first assess and maintain airway, breathing and circulation in order to assess the level of consciousness; always give high flow of oxygen in severe haemorrhage (if available); assess the vital signs, especially PR and BP immediately and frequently thereafter, to ensure venous access, among others.

Environmental impacts of plastic bag use