US Consular tours University of The Gambia 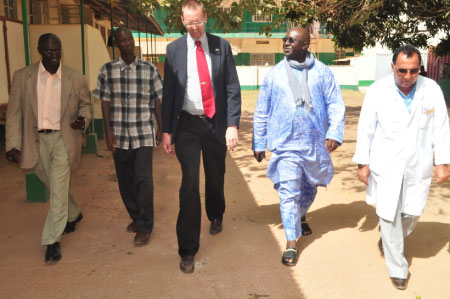 The University of the Gambia (UTG) on Monday March 26, 2013 received Andy Utschig, the consular officer at the United States Embassy in Banjul, who was taken on a conducted tour of UTG campuses.

Utschig started the tour in the morning at the Law Faculty building, where he was received by Yankuba Mamburay, senior university relations officer and Dr. Abubacarr Senghore, the acting dean of the law faculty.

Dr. Senghore showed the entourage the library, the classrooms, the faculty lounge, the computer lab, the moot court and a new building at the faculty that will house, among others, the legal clinic, and conference hall.

Senghore briefed his guest on how the faculty has metamorphosized into what it is today, and Utschig expressed positive impressions about how the UTG law faculty has grown so fast in just a few years.

Dr. Senghore announced that the number of students has increased five-fold, with new classroom blocs, a library, a moot court and now the construction of a three-storey law clinic complex.

A few years ago, there were no full-time faculty members, but now the faculty boasts of 11 full-time faculty, 10 adjunct lecturers, as well as visiting lecturers from the UK, India, South Africa, Nigeria, and Sierra Leone. The UTG law faculty has seven administrative staff and a number of other ancillary staff.

The US embassy official was opportune to see lectures being conducted, and to speak with the students.

The consular officer proceeded to the School of Business and Public Administration, where he was received by the acting dean of the school, Dr. Jainaba Kah and her staff, including Dr. Fanneh, Lang Sanyang and Muhammed E. Jammeh.

Dr. Kah welcomed Utschig and informed to him that the School of Business is the largest school within the UTG, and is hosted on the same grounds as the Management Development Institute, MDI. The ongoing integration of tertiary institutions under the umbrella of the university will bring the two institutions together, Kah further announced.

The UTG School of Business is almost one-third of the entire UTG enrolment, with over 1,500 students. MDI has up to 1,700 total intakes. The two institutions have a symbiotic coexistence, sharing human and material resources. Utschig also learned that the UTG has a consulting unit, which does consultancy services.

Dr. Kah showed the embassy official round, and Utschig got an opportunity to observe lectures.

The Brikama campus was next, where Utschig was told that it houses four of the university’s schools namely, the School of Arts and Sciences, School of Education, School of Information and Communication Technology, and the School of Agriculture.

The Brikama campus is also the home of the UTG chancery, the university administration, and Utschig was received by the UTG vice chancellor, Professor Muhammadou M.O. Kah.

Kah thanked Utschig for taking an interest in the affairs of the university, and spoke about the “good work and wonderful relationship” the UTG enjoyed with former US ambassadors Wells, White and now Alford.

Prof Kah informed Utschig about the collaboration and partnership with many US universities, prominent among which are Saint Mary’s College of Maryland, University of Springfield, Illinois, Drexel University and the University of Iowa.

Later at the UTG chancery conference room, Utschig held a brief meeting with a cross-section ofthe university faculty, UTG staff and student union executive, including leaders of the various student associations in the various schools.

Utschig advised the students to be steadfast and serious with their studies. He said UTG is “a very good university with very good reputation, and has a dedicated vice chancellor”.

He explained that having a university here does not disqualify anybody from pursuing further studies in the US, and that what qualifies one to get a student visa is proof that he or she is a serious applicant.

He said he has brought very good news, and announced that “The Gambia is the third sub-Saharan country with the highest per-capita student population in the United States.” He said this shows how much value Gambians put on education.

The students were invited to ask questions, and asked what the consular officer meant by “serious applicant”; why so many student’ applicants were rejected visas; why the visa application fees keep going up; and so on.

Utschig responded that serious student applicants are more specific in their answers, and know what and where they intend to study, and so on.

“The visa application fee is mandated worldwide by U.S. law to recoup the cost of visa services.  Many visas for Gambians are now valid for five years, in reciprocity with visas offered to U.S. citizens,” and that the statistics he just mentioned explains the fact that the student visa issuance in The Gambia is highly competitive against other countries.

Utschig was then accompanied by the UTG vice chancellor to the Faraba Banta Science, Technology and Innovation Park, where he witnessed lectures by, among others, Mathematics lecturer Dr. Kathy Lewis, who is American.

The Geo-Health Center, a joint project by the UTG and the University of Iowa, the administration offices, the Qcell donated tower, classrooms, the Taiwan donated computer labs and buses were among the facilities shown to the visitor.

The next place visited by Utschig was the School of Medicine and Allied Health Sciences located at the Edward Francis Small Teaching Hospital in Banjul.

There, the provost, Dr. Ousman Nyan and Dr. Khalil. Received them, and subsequently visited the classrooms and laboratories, where students were found conducting research and doing their practicals.

The team was also taken on a conducted tour of the new three-storey building being constructed at the hospital.

Precisely at 5 PM on Monday, what was supposed to be a 3-hour tour, but turned into a 6-hour tour, came to an end.

Professor Kah again thanked the US embassy official for his  interest in the UTG, and asked him to convey his gratitude to the US ambassador in Banjul. Kah assured Utschig of the university’s readiness to work with the embassy. 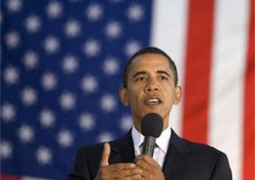