The Special Criminal Court in Banjul presided over by Justice Amadi yesterday made an order for the medical examination of one Mankang Sissoho, accused of murder and believed to be mentally imbalanced, to ascertain his mental status.

When the case was called, the accused was seen laughing to himself, but was not violent.

The counsel from the legal aid agency then told the court that they were informed by the prison officer that the accused was not well.

Baboucarr Jarju, a prison officer, told the court that the accused had been showing signs of mental imbalance, since he was brought to the prison.

The counsel from the legal aid agency said they were relying on the criminal procedure code, and urged the court to make an order for the accused to be taken to Edward Francis Small Teaching Hospital for medical examination to ascertain his mental status.

State counsel Olimatou Danso did not object to the application.

In his ruling, the trial judge said the accused was working disorderly, smiling to himself and laying his head on the box showing signs of mental illness. He said the accused was charged with murder and pleaded not guilty, adding that the prosecution called three witnesses with two remaining, according to the state counsel.

“Having now become aware of his condition, it was in the interest of justice we ask for a medical practitioner to examine him to ascertain his mental status,” the judge said.

He said the medical report should be produced on or before the next adjourned date. 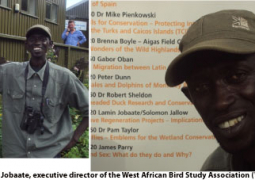 Environment: Ecotourism and The Gambia’s birdlife