Magistrate E. Jaiteh of the Brikama Magistrates’ Court Monday convicted and sentenced one Kani Sanyang to a fine of D5,000 in default to serve one year imprisonment, for assault causing actual bodily harm.

Delivering his judgment, the presiding magistrate told the court that the accused person stood charged on a single count of assault.

The particulars of offence were that on 28 February 2015 at Banjul International Airport, she unlawfully assaulted one Fatou Marong by punching her eyes with her fist and thereby occasioned her actual bodily harm.

He said the accused person was arraigned before the court on 1 April 2015, and she pleaded not guilty to the charge.

To discharge the burden of proof required in the case, the prosecution called four witnesses and tendered three exhibits, the magistrate said.

The facts relied upon by the prosecution were sufficiently elicited from the testimonies of the witnesses summarized, he stated.

The accused person also gave evidence without calling any witness after the testimony of the prosecution witnesses, he added.

“I have carefully listened to the proceedings and read the testimonies and exhibits adduced in the trial, where the prosecution alleged that the accused, Kani Sanyang, assaulted the complainant,” the magistrate stated.

It is a cardinal principle in criminal cases that the legal and evidential burden of proving every element of the offence beyond reasonable doubt lies on the prosecution, he went on.

Although, he continued, the prosecution could do so by either direct or circumstantial evidence, the law requires that in either case, the prosecution bears the legal burden of proving all the elements of the offence necessary to establish the guilt of the accused.

He had to adduce compelling and unequivocal evidence, which unshakably points to the accused as the lady who assaulted Fatou Marong.

The prosecution, therefore, has the shifting burden of proving all the ingredients of the offence with which the accused had been charged with, he stated.

With regards to the first element whether Kani Sanyang put Fatou Marong in fear, was the Actus Reus of assault, he continued.

The Actus Reus of assault could be committed by acts or words or a combination of both, he said.

He said Fatou Marong testified that the accused, Kani Sanyang, put her finger into her right eye and blood started oozing out and PW3, Samba Baldeh, who is a supervisor and who separated the fight, confirmed that Fatou Marong was injured on her eye and blood oozed out.

The medical report tendered stated that Fatou Marong was with laceration of the right upper lid with bleeding and circumferential sub-conjunctival haemorrhage, and the medical doctor who examined Fatou Marong noted on the medical certificate that the eye injury was caused by a long fingernail, the magistrate said.

“On 28 February 2015, Kani Sanyang fought with Fatou Marong and sustained an eye injury, and it is very obvious that it was Kani Sanyang who cut her right upper lid with her fingernail, and I hold this as a fact,” he said. 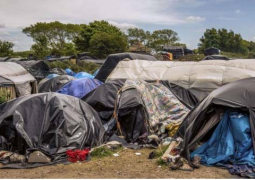