Concern Universal, an international NGO operating in the country, yesterday donated Ebola kits to the Ministry of Health and Social Welfare as part of its contribution to the fight against Ebola, which killed thousands of people mainly in Liberia, Guinea Conakry and Sierra Leone.

Speaking at the ceremony, held at the Central Medical Stores in Kotu, Tony Jansen, country director of Concern Universal, commended the Health Ministry for their efforts at making sure Gambia remains free of the deadly virus.

He said the international NGO is happy to partner with the government through the Ministry of Health to help communities to know about Ebola, adding that they will maintain such collaboration.

Dr Omar Sey, minister for health and social welfare, thanked the donors for their continued support and collaboration with the Ministry of Health.

He said the Gambian leader, President Yahya Jammeh, is aware of the donations the Ministry of Health is receiving.

Babanding Sabally, director of pharmacies, also thanked the donors “for this important donation”, saying Ebola, like other diseases, has no boundaries.

He said the move by Concern Universal is “a good initiative”, adding that the donated kits will be distributed to the hospitals.

Manfred Bojang, resilience manager of Concern Universal, thanked the government and the Ministry of Health for making The Gambia free of Ebola.

He said Concern Universal had conducted social mobilisation in 40 communities during which about 9,000 people were reached. They have also distributed 1,000 hygiene kits to families in West Coast Region and Lower River Region, he added.

“Concern Universal has also supported surveillance in 40 border-communities and coordinated radio sensitisation programmes using community radios in WCR and LRR,” he said, adding that the NGO had distributed 49 bean thermometers to the Ministry of Health that had been further distributed to the health centres, border-crossing points and airport. 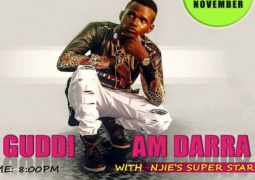