On Thursday the world over, celebrates the birth of Jesus. The event has been celebrated for what it signifies; with joy and thanksgiving for the coming of the One who was to save the world from sin. Besides the Good News is also the miraculous nature of the birth of Jesus. How can a virgin conceive and give birth. How can one be born without a father? But this virginal conception and the fatherless birth of Jesus is what makes Christmas so powerful and divine.

In the Jewish scriptures, the event is now believed to have been signaled as far back as the Hebrew prophets. It was prophesied: "The Lord Himself therefore will give you a sign. It is this: the maiden is with child, and will soon give birth to a son, whom she will call Immanuel. (Isaiah 7:14).

That maiden, interpreted as virgin or at least a very young woman of marriageable age, has been identified by later writers, especially St. Matthew, as the Blessed Virgin Mary.

In the Christian scriptures, accounts are given of the virginal conception in the Gospels according to Matthew and Luke respectively. Matthew tells us that Mary who was betrothed to Joseph gave birth to a son even though untouched by any man. In Luke Chapter 1, we learn that the Angel Gabriel appeared to the Virgin Mary and announced: "Rejoice so highly flavoured. The Lord is with you. You are to conceive and bear a son and you must name him Jesus.

In the Islamic scriptures, the Koran in particular, similar accounts appear. In Surat Al Imran, it is stated: "Behold! the Angels said: O Mary! Allah giveth thee Glad tidings of a Word from Him: His name will be Christ Jesus, held in honour in this world and the hereafter. He shall speak to the people in Childhood and in maturity, And he shall be of the righteous."

Then Mary said: "O my Lord! How shall I have a son when no man hath touched me?" The Angel said: Even so; Allah created what He willeth. And he will heal the blind and the lepers, And raise people from the dead."

What Christmas signifies and reminds me about, is God's faithfulness to His promises. He did after all keep His promise of old that He would send the Messiah who would deliver His people. It reminds us of the matchless All - powerful nature of God, and that we should all therefore hold our trust in Him who is constant and able to do all things. In earthly terms I am reminded that Christians and non-Christians are the same in their honour and faith in Jesus.

These significant chapters in human history is here to remind us of the love God has for man. The Son He sent is a symbol of His highest love to only save the lost sheep. By believing in this Christ, the new born Baby, the Saviour of the world and the friend that man can depend on to save one from the problems of the world. Herod and his hence men had different intentions as they thought that the new born Christ had come to overthrow him but Jesus' Kingship surpassed all that they thought and it was seen. Some of His apostles also thought Jesus came to be an earthly king but demonstrated by His answers to some of their questions in hard terms when he said in an answer to one of their questions, "I am the Son of the One who sent me." And they further said, Lord tell us who you are. These were all pointing to the fact that they were not sure of who He was. Some of them thought Jesus came as a political leader and Judas thought he would be the SoS for Finance, while others had their own feeling of what they wanted to be. But Jesus' thinking was quite away from such. Peter wanted to be given the SoS for Defense thus cutting the ear of one of those who came to take Jesus away.

The scripture tells us in simple terms how we should love the newly born Christ, by loving Him we put away a lot of things since He emptied Himself taking the form of man though He was God, enabling Him to fulfill the words of the scriptures. He was not only born but born, suffered, worked as a carpenter and only at the age of thirty three He was made to suffer for mankind. He did not complaint because He wanted to teach us as to what we would continue with when He is gone.

In our own lives today Christ is to be born in us always, so as to keep us on the safe side and make us worthy of entering into the the Father Almighty. Jesus has shown the sample of what to do to gain eternal life through His Holy birth, it is left with man to follow by His decrees.

All Gambians are wished a happy Christmas and a joyful celebration as we have always celebrated it before. May we all see next Christmas and many more to come, amen. 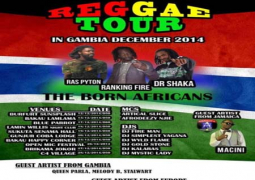 God can only multiply what is put into his hands 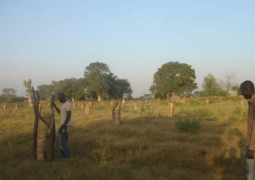