Students of The Gambia College Union recently handed over powers to the newly elected executive students body at a colourful ceremony held at the main hall in The Gambia college, Brikama campus. The occasion witnessed the convergence of college staff, ex-executives of the union, distinguished guests from the university of The Gambia, students from Stratford College of Management, students from Ba-Banutu Business College, members from Youth of Ambassadors for Peace, members from NUGG's, members of National Literary and Debating Society NLDs, students from MDI, students from GTTI as well as and other personalities including Press Clubs and the media.

In his opening remarks, The deputy registrar of the college, Mr Jallow, said the responsibilities of the incoming executive members in the union are to steer the affairs of the college and promote the welfare of all students. He added that the essence of unionism is not based on financial gathering but on collective objectives and responsibilities. According to Mr Jallow, the incoming executive is to close ranks with the out-going union in their operation of work and team up with other experienced people to move the union forward positively in unity, peace understanding and co-operation. He urged the new members to be united as one, serve the students to the best of their abilities and make social benefits and not profits. Mr Jallow finally stressed that the union, one should work together in harmony and for progress adding that if this is not done, then they will be divided and fall. Other speakers included the outgoing president, Mr. Musa H Camara, Mr. Bakary Badjie ex-secretary general and Mr. Ebrima Bah. Certificates were awarded to the out-going members of the union. 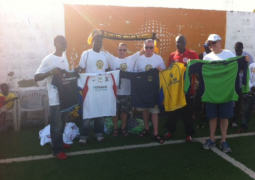