Sickle Cell Association of the , recently trained its core members on the effects of Sickle Cell at the St. Therese Upper Basic School, facilitated by Dr. Abdoulie Secka of the RVTH.

Dr. Secka defined sickle cell disease as a hereditary blood disorder that affects people in ways that can be felt and seen, such as causing pain and swelling.

"It also affects people in less obvious ways such as slowing physical development, damage to internal organs such as the liver, kidneys and spleen. It causes stroke, eye sight problems, acute chest syndrome, priapism, blindness and premature death among many more. It is not contagious for one to be born with it," he stated.

Dr. Secka further said that modern studies suggest that sickle cell anaemia probably originated thousands of years ago in or around the country now called Saudi Arabia, from where it spread East to India and West into Africa. He said other areas included Africa, , Latin America, South America and the Caribbean, , and some of the Mediterranean countries, such as and . It is also common among African descends, he added. He advised that those suffering from it should avoid extreme physical exercise for obvious reasons.

Andre Sambou, the Cordinator thanked Dr. Secka for his insight into the disease and his know how as, he put it, he had answered salient questions from journalists and participants.

"We are thankful to our members for the training because we need it ourselves because we cannot give what we don't have," he concluded. 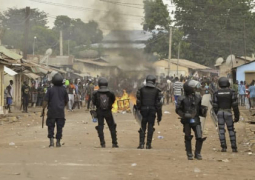