Charity March Arrives in The Gambia

Charity March Hungarian base organisation whose ultimate establishment is to promote the general well being of people particularly the less privilege arrived on the shores of the from on the 23rd 2009.

In an interview with this paper, the head of the mission Tamas Welsz informed that, charity March came as a result of some Hungarian businessmen who have work and leave in the and honestly believe that they have to be involved in the advancement of the country and at large. Mr. Welsz said that these people really want to help not with empty words but back their pledges with an action.

European countries like that has promised to bolster this resourceful enterprise (charity march) initiated by .

Mr. Welsz elucidated that the caravan that drove all the way from Europe to included forty people as members of the organisation. He revealed that, that the charity will donate two incubators bandages and jibs to the department of health as a clear manifestation of their interest to support the .

He was profusely thankful to the Hungarian High Commissioner in the for her intervention in making the noble gesture possible. He posited that, charity March have other intervention in the pipeline for the in the near future. "Charity March is purely a feeling of charity and simply giving out materials available to us that are in good use back to the people" he enthused.

The mission head also informed reporters that 2009 is the year of Africa in the European Union calendar and in that sense charity march will explore in two adventures one in May that entail The Gambia, and . And in October another trip will be organise to , Guinea Conakry and . 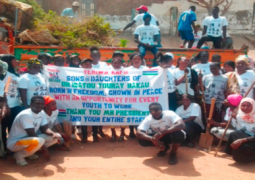