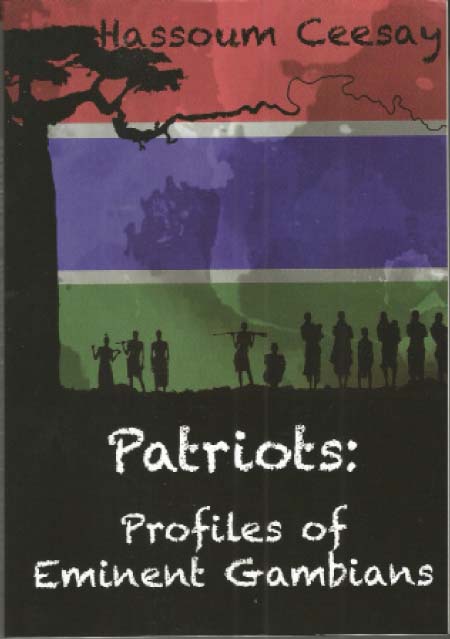 Hassoum Ceesay’s Patriots: Profiles of Eminent Gambians fills the biographical gap of personalities whose deeds forged Gambian history.Much written material on Gambian history is a general study of events and periods. Significantly, 40 patriotic Gambians profiled in this book belonged to and operated in different epochs and circumstances from the 18th century to present.Their deeds evidently typify ardent patriotic fervor for the betterment of their societies.

Personalities profiled in this book are contextualized in the socio-economic and political milieu of their times — perhaps at the height of pre-colonial lawlessness and fierce commercial rivalry in Senegambia, under colonial subjugation, or post-colonial socio-economic uncertainties. In modern historical biography writing this is an important parameter for the evaluation of a life story, a balanced analysis of the individual or individuals situated in the larger context, or with an analysis of the power structure and the dynamic socio-economic interplay between the individual and the society.

This book argues that many Gambian women resorted to commerce to maintain their efficiency and productivity at household and societal levels, as colonial policies alienated them from decision making. Fenda Lawrence, one of the women profiled, was born to a Serahule family that lived in kingdom of Wuli. In 1780, she inherited the ‘vast business concerns’ along the River Gambia of her late husband, an Englishman James Lawrence.Her business did not remain successful because of social and political factors of that time, among them: she was forced to yield much of her business to her parents, lost her boats to the king of Wuli, and she was coerced to surrender much of her fortune to armed marauders. As a result, she resettled in Georgia, USA in 1792, with her two sons, where she reestablished her business. By 1811, she became a popular importer of kola nut and highly respected retailer among her customers and competitors.Another woman profiled is Hannah Forster, born 14th January 1893. She was an accomplished merchant, seamstress, church worker and social activist, and most significantly she was the first Gambian woman to enter into active politics. She sat in the Bathurst Town Council in the 1930s.

Another set of business personalities profiled include Momodou Musa Njie, Henry Madi and Joseph Richards. Alhaji Momodou Musa Njie’s was indeed a story of ‘from rags to riches’. Born in Basse ci. 1908 to a cattle rearing family, by early age he began herding cattle. Aged 18, he became an apprentice to a Lebanese businessman and later established his own business. By 1965, Momodou Musa Njie became Gambia’s first millionaire and one of Africa’s most successful businessmen. Joseph Richards and Henry Madi, both successful businessmen and nationalist politicians are also profiled.

Kemintang Camara, the King of Niani Kingdom (present day districts of Sami, Nianija and Niani) was one of the traditional African rulers who confronted the Europeans. In 1835, he inflicted a humilliating defeat on the British in a battle near his capital, Dungaseen. As a result, Governor George Rendall who led the British forces was recalled to London and was dismissed. Another traditional leader who resisted colonial rule was Musa Molloh. His empire stretched from the River Gambia to the Rio Corubal (in present day Guinea Bissau) which incorporated both the British and French territory. In 1901, the British Fulladu was incorporated into the Protectorate of the Gambia and Musa recognised as the ruler. He was exiled in 1919.

Another set of traditional rulers profiled in this book are the chiefs. Chief Mama Tamba Jammeh, Omar Mbackeh and Mattar Ceesay left an indelible legacy in the institution of chieftaincy in The Gambia. Mama Tamba Jammeh, in his 40 years as the chief of Illiasa from 1928 -1966 brought prosperity to himself and his people. In addition to his dedication and loyalty as a chief, he was a successful farmer. Kanni Kunda rice fields, one of the biggest in the British West Africa at the time, Bambali and many other fields he established helped in attainment of food self sufficiency. His introduction of ox plough in 1939 revolutionised farming in his district and The Gambia in general. Matarr Ceesay was appointed chief of Upper Saloum in 1935. He shared many things in common with Mama Tamba Jammeh and Chief Omar Mbackeh. They were the few literate chiefs in the colonial era and they all sat in the legislative council.

Eric Herbert Christensen, John Andrew Njai-Gomez and S.H.O Jones are the three Gambian former civil servants profiled in this book. Eric Herbert Christensen was chief among civil servants who planned and implemented policies that laid solid foundation for independent Gambia’s fledgling civil service in a career spanning from 1965 to 1970. At his retirement, he had already served as an Assistant Secretary at the Ministry of External Affairs, Principal Assistant Secretary at the Prime Minister’s Office, External Affairs as well as Secretary to the cabinet concurrently.Dr. S.H.O. Jones was the second Gambian trained medical doctor. He became the Director of Medical Services in 1952, and Speaker of the House of Representatives in 1972.His numerous achievements at the medical services include decentralization of medical facilities, research on malaria and TB.

Sir Samuel John Forster, Wilfred Davidson Carrol and George St. Claire Joof are the lawyers profiled. Sir Samuel Forster was called to the bar in 1898 becoming the first Gambian indigenous lawyer. He defended many Africans from Bathurst and the Protectorate, particularly chiefs who fell foul of the colonial government.

Abdou Saidykhan, a hunter who is said to have killed over 200 hippos before his death in 1968 also got his place in this book, as well as Abdoulie Samba, “a xalamist, bard and proponent of Wollof Culture”, who was one of the most famous ambassadors of Gambian culture in the 1960s through to his death in 1980.

I fervently believe this book is an invaluable asset for Gambian and Gambianist scholars, policy makers, and the general public. This is a detailed, well-presented and well-researched compendium of profiles of very important personalities of Gambian history. This book is a modest contribution to the famous sources on Gambian history such as Gray’s 1940 History of The Gambia, Gailey’s 1964 A History of The Gambia and Rice’s 1966 Enter Gambia: The Birth of an Improbable Nation. This book shall stand out as a unique reference, the magnum opus, to be quoted ad nausem by writers and historians.

Sana Saidykhan teaches History at The University of The Gambia