Magistrate Abeke of the Brikama Magistrates’ Court on Monday warned and discharged one Alagie Touray charged with cattle rustling.

The facts of the case as narrated before the court revealed that it happened on 25 February 2012, when the accused, Alagie Touray, was with a goat and was spotted by one Essa Kolley of Jabang village.

The facts added that the said Essa Kolley became suspicious and went to call his brother by the name Sulayman Kolley, who interrogated the accused to confessing to stealing the goat from Labakoreh village.

The accused was later taken to Old Yundum Police Station, where he was cautioned and charged with the offence committed.

Sulayman Touray, after admitting the offence, begged the court to temper justice with mercy, as he was the breadwinner of his family. 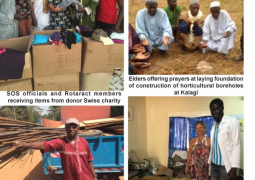 A call on the powers that be