Most of the time when we talk about gender, some people take it to be an issue about women only, while others define it with the famous figure, 50-50, thereby confusing the fact that grassroots women do not have the means of exploring the word “Gender”.

When we take a walk along the streets, markets or any place where women gather, we now hear them saying it is 50-50, giving it their own meaning.

So I asked myself what is going on. Why is the grassroots woman calling gender equity 50-50?

Was the information transmitted that way or are they the ones who gave it that meaning?

Whatever the case may be, there is a need for them to be well informed on the meaning of “gender” and related issues, as well as on the laws that are made specifically for women, so that they are able to fight for what belongs to them.

We all know that the definition of gender will not be complete if the masculine part is removed or not mentioned.

Gender we all know is widely talked about in The Gambia, with various women’s groups holding symposiums with women on gender and related issues.

When we talk about gender, most of the men will tell you it is a weapon used by women of the 21st century to fight against men.

Some will think gender is referring to the sex of an individual, whether an individual is masculine or feminine.

Some women will also say it is about 50-50 with men; that they should challenge men any how they want, giving it a different meaning and purpose.

Gender is referring to socially ascribed differences, between men and women in regards to differences in roles, expectations, limitations etc.

Gender is different from sex, which refers to the biological and physiological characteristics that define men and women; for example, women mensturate while men do not.

What is gender equality?

This simply means giving equal opportunity and facilities to all irrespective of sex so that each can use his/her potentials for personal development.

It means suppressing factors that hinder the development of women while strengthening the factors that enhance it. It also means that every person is treated equally, irrespective of his or her sex.

In this world, God created men and women.

We had both men and women in The Gambia, so it will not be fair for men to take up all the decision-making positions in the country, and that is where the gender equity comes in.

If you go to our homes today, both men and women contribute in the upbringing of children, which shows that we cannot go without each other.

Gender, as some men think, is not a weapon of war used by women to eliminate them; rather it is the solution to create a just, free and fair world for all.

What is Gender Stereotyping?

This means attributing certain roles to males and other roles to females.

Stereotyping is strengthened by cultural values, and should be combated hourly, daily and on a large scale.

For instance, it is not proper for someone to say that carpentry is for men and cleaning is for women.

Just as one cannot also say that cooking is for women and eating is for men.

Today the best chefs in the world are men. There are some men who can cook better than women.

Today we have seen women excelling as engineers, mechanics, camera women putting a camera on their shoulders and going up and down with it.

In this world today, qualification is what matters.

The party leaders should be willing and ready to allow women run for political positions in the country.

They should give them the equal opportunity and support they give to male candidates, so as to enable the women do their campaign the way they want to do it.

They should let women graduate from clapping, singing and dancing for male candidates, and advocate for them to stand as candidates and let men do the singing, clapping and dancing.

Male candidates should also graduate from digging into the past of women candidates just to prevent them from standing as candidates, because everyone has a story to tell whether good or bad.

Let the women know about the Women’s Act 2010

This message is simple and very clear, but since the employers know that they cannot disobey the Women’s Act 2010, they decided to limit or stop the employment of women of child-bearing age, especially the woman that is married.

As a man, managing a bank, how would you feel if your wife is denied a job because she is a woman of child-bearing age?

As a woman, the Women’s Act was not enacted for the sake of being enacted; it is there for you so that if your rights are violated, you can go to FLAG or the Women’s Bureau and they will help seek redress.

Section (2) states that in order to reinforce the common responsibility of men and women in the upbringing and development of their children, every father is entitled to a reasonable period of time not exceeding ten working days, as paternity leave with pay, for every child delivered for him.

Since its enactment, most women do not know that it exists or what it is all about.

It is really sad, because the grassroots woman somewhere in the country is denied land ownership because she is a woman.

A woman in URR is denied inheriting his father’s cattle because she is a woman.

A woman in Badibou is thrown out of her late husband’s compound with her children by the husband’s brother, but did not know what to do because she did not know that the Women’s Act exists.

It is not the fault of these women, but those responsible for educating these women about the laws.

These are women who were not opportune to go to school, and they are relying on you the educated ones and those they elect to teach them about the laws.

The grassroots women, though they did not go to school, are very important and willing to learn new things every day.

So help them strengthen themselves to be able to stand up to any form of oppression from anyone. 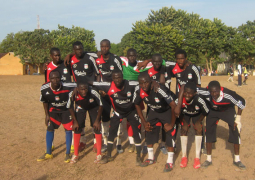