Bob Jones, a British philanthropist, on Saturday donated a brand new player changer board to Brikama Youth and Sports Committee (BYSC) through Dodou Bojang of the Gambia Radio and Television Services (GRTS) Radio at a presentation ceremony held at the Brikama Mini-stadium.

Speaking at the ceremony, Jones said he was pleased to donate to the BYSC, adding that he had been sponsoring Under-15 tournaments over the years in The Gambia for lower basic schools.

He also said he has always given complete kits with medals to the last four teams of the competition every year and that he would donate another player changer board to Banjul Sports Committee on Friday.

He added that he would always share materials to different areas and that it was Dodou Bojang who recommended Brikama for one of the player changer boards.

He was impressed with Brikama United for doing “very well” in the first division league last season, he said and did wish them a much better season when the league commences.

Mr Jones also stated that he has been supporting not only sports in the country but also education, health and other sectors and would continue to support the Gambian community.

Alagie Darboe, secretary general of the BYSC, said they were appreciative of the gesture thanks to Dodou Bojang for identifying Brikama for the donation.

He said the donated item is highly useful to the committee because the ones they are currently using are obsolete.

He also described the gesture as timely, adding that having the item is one thing and sustaining it is another.

He urged members of the committee to take great care of the facility.

“This is what the committee has been looking for and that we are looking forward to working with Bob Jones in the future,” Darboe said about the donation. 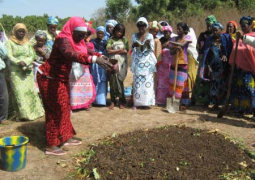