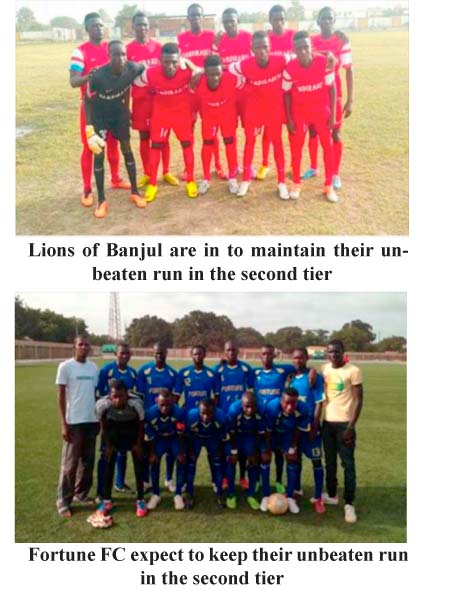 Lions of Banjul and Fortune FC are both ambitious to maintain their unbeaten run in the 2016-2017 Gambia Football Federation second division.

The Banjul based outfit and Farato based outfit are unbeaten since the start of the second tier campaign with 15 points each in seven league matches but Fortune FC are leading on goal difference.

Lions of Banjul are set to host Fortune FC in the week-eight fixtures today 12 January 2017, at the Banjul KG5 Mini Stadium.

Lions of Banjul will vie to edge-past Fortune FC to top the second tier standings and also extend their unbeaten run to eight league matches.

Fortune FC will oppose to beat Lions of Banjul to rejuvenate their lead and also revive their unbeaten run to eight league games.

Elsewhere, Blue Star will welcome Waa Banjul in the other week-eight fixtures at the Serrekunda East Mini Stadium on the same day.

Blue Star are occupying bottom place in the second tier with one points in eight league matches, and will oppose to beat Waa Banjul to bounce back after losing to Brufut United 1-0 in the week-seven fixtures played at the Banjul KG5 Mini Stadium last week.