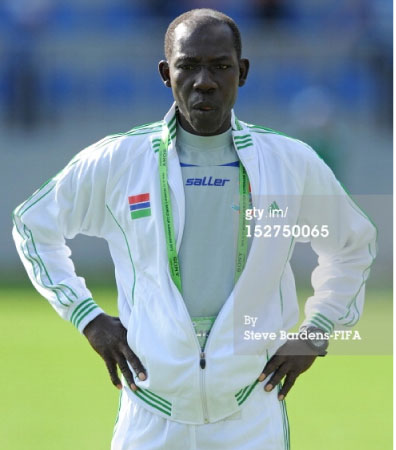 After another thumbing of goals against his side in the FIFA U-17 Women’s World Cup in Azerbaijan, Gambia’s Coach Buba Jallow spoke to the press at the Delga Media Centre in Baku.

Flanked by his opposite number, Ferrier Guy of France, Buba described his defeat to France as “fair play and will take it in good faith”.

Buba said his side has learnt a lot of lessons from the tournament and because it was their first time in the FIFA tournament, “we have also gained experience from it”.

Asked about his future as head coach of the team cognizant of the bad performance, he said: “Every successful coach started from somewhere and with these results, I think we’ll be going back to the drawing board and look at our weak areas, but I have accepted the defeat in good faith because it is football.”

Buba noted that his girls successfully qualified from the African series to the World Cup, “which is a good record for The Gambia”, and although coming to Azerbaijan had not given them the desired results, “we shall look at the problems for more performance in the next tournaments”.

Buba Jallow reiterated the fact that his girls had not worked together as a unit tactically in the field, which “hampered us badly”.  He added: “They were instead working individually and not as a team.”

Ferrier Guy, the French coach, said his side was prepared to beat The Gambia despite the description by many of the small West African country as “difficult opponents in the Group”.

He congratulated The Gambia for their performance but said his team’s tactic was to win by scoring more than seven goals and hoped the result of the other game went their way.