As the annual summer community football competition of “Nawetan” edges closer, the Alan and Carole Foundation, a charitable organization in The Gambia, through its partners in United Kingdom, donated balls, sets of jersey and T-shirts to Marcus Garvey FC in Banjul.

Speaking on behalf of the organization at the presentation ceremony held at the Banjul Mini Stadium yesterday, Abraman Suwareh, treasurer of the organization, said the donation to Marcus Garvey FC might not be large but they hoped it would be of good use to the team.

It is also hoped that their donors in UK could also be encouraged to even give more next year, he added.

In his concluding statement, he said: “Finally, we would like to say sports should be encouraged in every way to keep the body healthy and the mind focused. It keeps the children out of trouble and gives them the opportunity to a better future.”

Lamin Daffeh of Marcus Garvey FC, in his remarks, said he was happy with the gesture because that was the first time the club had benefited from such a gesture.

“We need more of this kind that can boost the morale of the players,” he said, adding that football can’t go on without finance.

“We really appreciate the gesture and hope it will continue,” he also said, adding that the team performed well this year during the Nawetan in Banjul.

Ousman Marong, a member of the team’s officials, also expressed appreciation with the gesture, saying that was what they were looking for “because to acquire sponsorship in The Gambia is difficult”.

He also advised the team to take good care of the donated items, noting that there are teams that need it but have not got it.

If they had many of this kind they would win trophies every year, he said. 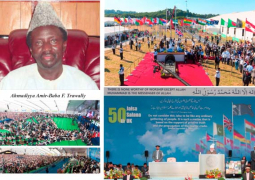