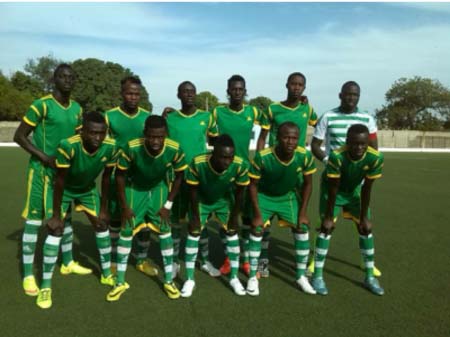 Bombada are up to beat current league leaders Gambia Armed Forces in their re-scheduled week-three fixtures tomorrow, Saturday 11 February 2017, at the Brikama Box Bar Mini Stadium to move away from relegation zone in the 2016-2017 Gambia Football Federation domestic division one league.

The Brikama-based outfit are occupying second-place from bottom in the country’s top flight with 7 points in nine league matches.

They will also need to defeat Gambia Armed Forces to move away from the danger zone to boost their chances of staying in the country’s premier league yet for another season despite their poor run of form in the league campaign.

The Soldiers are currently topping the league with 20 points in nine league matches one point ahead of second spot Real De Banjul.

The Soldiers will broil to spank Bombada to open the gap as well as boost their hopes of clinching the 2016-2017 Gambia Football Federation domestic league title since the 2008-2009 season.

The Tallinding-based outfit are fifth in the top flight with 13 points in nine league matches. They are expecting to bounce back against Real De Banjul to improve their position in the summit, after losing to struggling side Gamtel 2-0 at the weekend.

The City-boys are second-place in the top flight with 19 points in nine league matches. They will be up to trounce Tallinding United and hope Gambia Armed Forces slip to Bombada to regain top spot in the country’s premier league after dropping to second-place from a goalless draw with current league champions Gambia Ports Authority at the weekend.