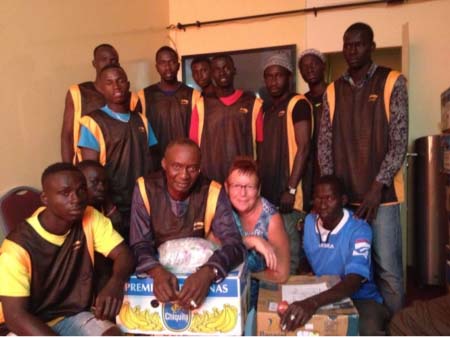 Chairing the presentation, Gambian business tycoon Modou Turo Darboe, Chief Executive Officer of VDF, expressed appreciation with the donors of the sport items, saying his counterparts are very helpful and ready to contribute to the development of this country.

He went on to advise the youth to maintain discipline in sport, saying discipline is something that can earn someone achievements.

He concluded by thanking his counterparts for the “wonderful” gesture, while assuring them that the sports materials will be put into good use.

Speaking at the presentation, Momodou Lamin Jagne, programme manager of VDF, said the relationship between the Foundation and Boca Loho started in 2009, adding that since then the two partners have been collaborating on different areas such as education, health and youth development.

The importance attached to sport cannot be overemphasized since nowadays sport is very significant in the development of the youth, he stated, while commending their counterparts for donating the materials, which will benefit not only Fajikunda youths but also the country at large.

While underscoring the relevance of involving in sport, Mr Jagne pointed out that sport is cross-cutting.

He also took time to thank the Chief Executive Officer of VDF, Mr Turo Darboe, for making the event a reality as well as for his humanism and continued support to the Gambian population.

He noted that Mr Darboe has been very helpful to the Gambian youth and contributing to their development in various ways.

He also called on other Gambian businesspeople to emulate his gesture.

While describing the presentation of materials as timely and useful, Mr Jallow expressed appreciation for the gesture.

For her part, Anh Bosselaar, team leader of Boca Loho from Holland, explained briefly about their relationship with VDF, saying they have been doing a lot of things together with VDF towards the development of the country.

She expressed appreciation about the hospitality of the country, saying she was very delighted to donate sports materials to the Gambian youth, particularly to the football club of Mr Modou Turo Darboe.

The presentation held at Mr Darboe’s office was also attended by his officials from the VDF.