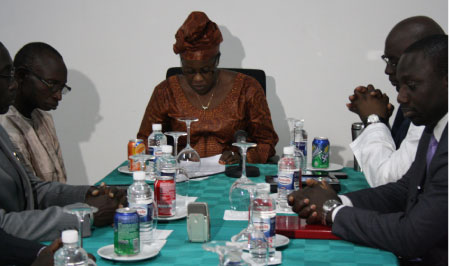 Speaking at the inaugural ceremony, Fatou Mass Jobe-Njie, Minister of Tourism and Culture, said in the course of the past year, the Gambia Hotel School has undergone tremendous transformation in terms of infrastructural development and the installation of new equipment and furniture, thanks to assistance provided by the Spanish government.

These transformations, she said, are meant to support the envisaged changes in the school, which as of January 2013, is to become a semi-autonomous government institution that will receive an annual subvention to run its own affairs.

“In addition to the subvention, the institute will also be expected to raise its own revenue through tuition fees for its regular courses, the provision of training services to various stakeholders in the tourism and hospitality sectors, including hotels and restaurants, as well as other services that it can render to stakeholders and the community at large,” she stated.

According to her, the institute must combine its core mandate of providing the requisite training to meet the human resources requirements of the tourism and hospitality sector, notably in junior, middle and senior level positions with a business acumen that allows it to supplement the financial support rendered by government through funds generated by its various services.

Currently, the Tourism minister noted, the school only offers a certificate programme.

“The goal now is for the GTHI to offer courses in Tourism and Hospitality to the diploma and Higher National Diploma levels.

“It is also envisaged that the institute’s diploma programmes will be aligned to the tourism courses that are being offered at the University of The Gambia at the undergraduate level in such a way that students leaving the institute with a higher National Diploma in Tourism and Hospitality will gain entry into the University of The Gambia to pursue a full time course of study leading to a bachelors degree in Tourism,” she stated.

Professor Muhammed O. Kah, Vice-Chancellor of the University of The Gambia, who is also the chairman of the Board, commended President Yahya Jammeh for the trust he has in them in giving them this task of national concern.

Vice-Chancellor Kah told the gathering that what is important is their collective experience through the private and public sectors, adding that tourism is the second largest economy of this country.

“We are all working for high caliber services in tourism, and with that we need competent staff. We can assure you that we can do our best to support the institute,” Kah stated.