The lion is neither the most powerful beast in the animal kingdom; nor is it the fiercest or the fastest, but it is the bravest and the most determined and to top it all fearless. Nothing can stop it, particularly when it is hungry, from attacking another animal for prey -- much more so when its cubs are restless for food.

The Christian can be likened to a greater lion, the Lion of the Tribe of Judah – Jesus of Nazareth, the Indomitable Lion. He alone has conquered sin and death to give all humanity ‘the right of way’ by which to access eternal life. As children of God, we automatically become sons and daughters of the Most High God. His authority is bestowed on us to walk in victory on this earth. He instructs us to “Go into all the world and preach the good news to all creation.” (Mark 16:15)

The good news each Christian has to share to the world is that it is needless to harbour any fear. Our Lord Jesus has done all that is required to wash his children from the guilt of sin. In the dying minutes on the cross, as He gasped His last breath, He shouted: “It is finished!” By this He meant that mankind’s archenemy, Satan, has become a toothless bulldog.

The tormenter is no match for the Lion of the Tribe of Judah, the Conqueror. As a result anyone who acknowledges Him as the Ultimate Arbiter, the Giver of new life, and the Winner over all trials and tribulations is given the assurance to live a fearless life - assured of God’s protection.

Multiple instances in the Word of God, the Bible, the words of assurance and comfort are echoed.  “Fear not!” “Fear not, for I am with you.” “I will never leave you nor forsake you.” “I will be with you even to the end of the age.” “Nothing shall by any means harm you.” These assurances attest to the fact that there is a formidable but negative force out there in the arena. But we are told repeatedly, it is needless to fear; for there is nothing that the devil can do to you or me. The devil is as big as we make him; but each time we magnify him, we make our God look smaller in our eyes.

The Lord Jesus asserts, “For I have conquered the world.” We deduce

that the devil, who rules this world, is a defeated foe. Skilled in his tactics of intimidation, the devil will appear to pose a threat to those who do not know about his fallen status. Whenever he directs his “fiery darts” at you, tell him to the face: “No weapon forged against you will prevail and every tongue that rises against you shall be silenced.” (Isaiah 54:17)

Whenever you exercise your ‘right of way’, it is primarily because you are privileged. Every person bows. In traffic, people give way letting you go first. The Bible calls you “the head and not the tail.” Indeed you are royalty, and must be treated as one. “But you are a chosen people, a royal priesthood, a holy nation, a people belonging to God, that you may declare the praises of Him who called you out of darkness into His wonderful light.” (1 Peter 2:9)

We have a Father who bears the title; “God the Blessed and only Ruler, the King of kings and Lord of lords, who alone lives in unapproachable light, whom no one has seen or can see.” (1Timothy 6:15-16) It is His nature to give generously: “Now to Him who is able to do immeasurably more than all we ask or imagine, according to His power that is at work within us, to Him be glory in the church and in Christ Jesus throughout all generations, forever and ever! Amen. (Ephesians 3:20)

Eternal life is our reward. “Many are the afflictions of the righteous but the Lord delivers them from them all.” (Psalm 34:19) Your right of way depends largely on the relationship that you knit with the Father, the Son and the Holy Spirit – three separate entities yet unique in character. Speak to Him daily as your Father, not like to a stranger. He bids you to “Ask and it will be given to you; seek and you will find; knock and the door will be opened to you. For everyone who seeks receives; he who seeks finds, and to him who knocks, the door will be opened.” (Matthew 7:7) Have you asked, sought and not found Him?

Start with loving Him because He first loved you. He loved you when you were a sinner, unworthy of love. You are merely reacting to His  gesture of an outstretched hand. Then obey Him because “Obedience is better than sacrifice.” Take pleasure in doing His bidding. Know that “His commands are not burdensome.”(1 John 5:3)

Coming to Jesus, surrendering your life and your all to Him is the best decision you can make in your lifetime. He promises to take care of all aspects of our life. “And my God will supply all your needs according to His glorious riches in glory in Christ Jesus.” (Philippians 4:19)

Our Lord Jesus during His earthly sojourn saw to it that you lacked nothing. He prepared a Way out of all your troubles. He has gone before you to His heavenly abode to prepare a room for you, Where? in His Father’s house. (John 14:1-2)

He invites one and all to “Come to me, all you who are weary and burdened and I will give you rest.” (Mathew 11:28) Count yourself among the BELOVED, when you do. 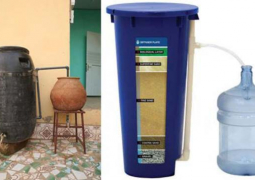 Stakeholders in the groundnut sub-sector meet in Jenoi