Catholic clergy from English-speaking West Africa are already meeting in The Gambia for the Episcopal Conference of the Association of Episcopal Conferences of Anglophone West Africa (AECAWA) to deliberate on the burning issue of illegal migration in . Day in, day out, West Africa loses at least a youngster to the perils associated with illegal migration either across the or the turbulent sea. And there seems to be no end in sight for this tragedy.

Frustrated by the lack of opportunities for advancement in life generally, youth who are impatient with life risk life and limb to get across to where life is believed to be better off. According to media, very few of the illegal migrants make it to their final destination. It is either they get stranded along the way, having been cheated by some scoundrel, or they lose their lives at sea or in the scorching desert.

The irony is that the youth leave home with high expectations, which are scarcely fulfilled. While their relatives are filled with hope and expectations of a better life, they hardly reckon with the fact that their loved ones could be in a fix somewhere in the desert or drowned in the sea. Some of them do manage to get back home after many fruitless years of wandering in the wilderness. But for the unlucky ones, their parents are still pining away for their return.

Only an infinitesimal number of the illegal migrants are known to have been successful in their quest. Even then, they relate horrible tales of deprivations and atrocities along the way meted out on them by scoundrels who were desperate to bleed them to death - and only to discover that is not the paradise they had been led to believe it is.

The theme of the AECAWA is therefore timely and relevant to the people of the sub region. We expect a lot of proposals to be made at the meeting; and we also expect that such proposals will be implemented to put an end to the scourge of illegal migration that is robbing the sub region of its youth.

At the root of illegal migration are the dwindling economies of the sub region that have made living desperate and miserable for our young people. At this point, a distinction must be made between migrating for adventure and migrating in search of a more fulfilling life. There is hardly any West African youth who leaves home for the fun of it; they do so in search of the proverbial greener pastures. So the challenge for our leaders is to create the enabling environment for the youth to live out their dreams here in the sub region. Mere rhetoric will not be enough to deal with the issue. What is needed now is pragmatism and good governance in every way and at all levels of society so that resources are equitably distributed for the good and benefit of all.

It is also envisaged that this conference will also address and give pronouncement on the element of illegality. Illegal migrants not only equally face the hazards of travel and adventure and pathetic conditions abroad, but also the detriment of being tried in tribunals and either jailed or deported, or both, Anything illegal is also immoral, and churches and mosques would do well to pronounce and preach against this illegal activity.


"Generally young men are regarded as radicals. This is a popular misconception. The most conservative persons I ever met are college undergraduates". 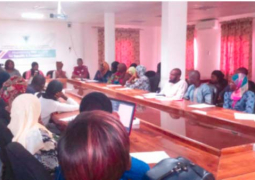