Speaking at a brief presentation ceremony held at the headmaster's office Mr. Jawneh said the donation was from the proceeds of his farm and is his personal contribution to the development of the school. "Though small for me compared to what I really love to be present here today but am pleased that I made my commitment once again. I am always happy in sharing my merger resources with the less privileged people of the society especially orphans and vulnerable children". Jawneh reaffirmed his organization's commitment and his personal resolve in complementing government's effort in attaining relevant and quality education.

In receiving the items on behalf of the school, Mr. Sambou Sanneh, a senior teacher in the school, thanked Mr. Jawneh for his kind gesture. He described the donation as timely and promised that the items will be put into good use.

Other speakers included Oustass Yahya Sumareh and Mrs. Bah who both described the donor as a true friend of the school. 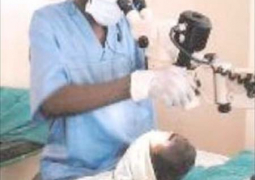