Why Football Veterans Should Play A Part in Football Development

Concerning the development and promotion of football in The Gambia, Veterans have felt sidelined for 15 years or more, in the 70s and 80s, by football rulers who never played football in their lives, even school football. The sport suddenly went through a big decline, and former football star players and technicians kept their distance from the stadium out of personal alienation, frustration or dejection. A later realization that staying away solved no problem was what caused the return of the Veterans with a firm resolve to help rebuild and restore football to its former glory. In that sense the Veterans association is more of a movement than a sporting club. Their mission is to help salvage football, raise it to a high level, and win back the confidence of fans, sponsors, and international sporting bodies such as WAFU, CAF, and FIFA.

The focus of the Veterans Movement can be seen as three-fold; namely, support to youngsters, galvanizing of league and national teams. Young players are equipped materially and given necessary technical support. In the case of league football, veteran technicians are posted to respective teams for the purpose of providing technical, financial and morale boosts where feasible. As a consequence the presence of veterans has invariably always produced team confidence and enhanced performance. This of course means greater football power and delivery necessary for high ranking and representation in major tournaments. Rankings and high level tournament participation has shown itself very lately, and has accounted for overall progress in World Cup and Nations Cup qualifiers. What Veterans have achieved is providing frontline support, competitive mental and psychological preparedness of national teams before international competitions.

For much of this important collaboration, appreciation has to go to open-minded and visionary GFA leaders in the persons of O.B. Fisco Conateh and also Gabbie Sosseh successively, for agreeing to encourage the collaboration of veterans and developing a working relationship. Happily that relationship has been maintained and strengthened by the current executive under the leadership of Sidi Kinteh. The diamond question always is, "who better can support football than the people who have excelled in it all their lives?!" 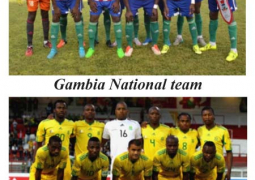