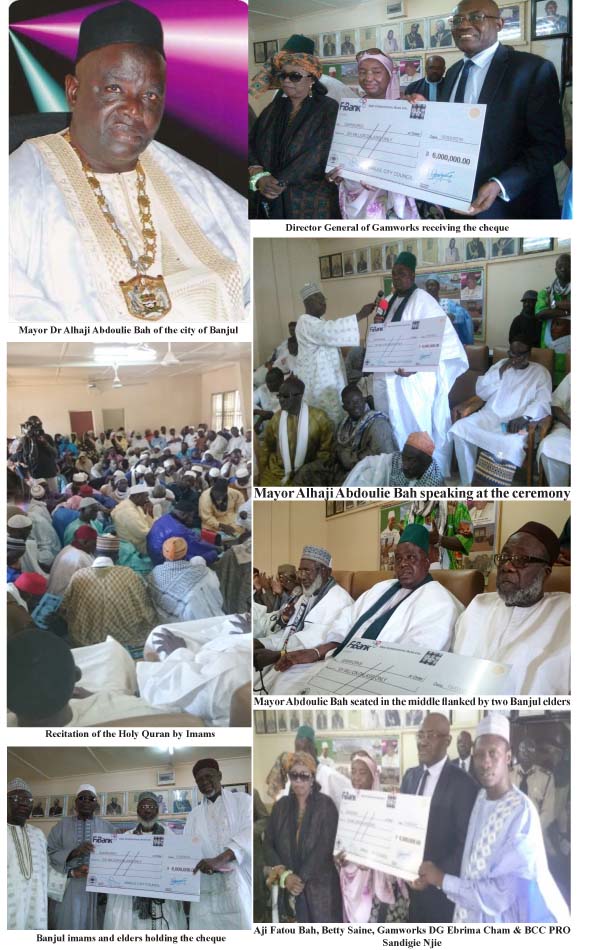 Mayor Abdoulie Bah of the city of Banjul recently presented a cheque for six million dalasis (D6 million) to Gamworks, as part of Banjul City Council’s counterpart contribution to the implementation of projects within the capital city, at a well-attended ceremony held at the council’s conference hall.

The ceremony began with the recitation of the Holy Quran presided by the venerable Imam Ratib of Banjul, with other imams, councillors and elders across the city of Banjul, who prayed for the successful implementation of the outlined projects within the targeted period.

The elders of Banjul and Banjulians, officials from the Ministry of Lands and Regional Government and Director General of Gamworks among a host of dignitaries graced the occasion.

“The recitation of the holy Quran by various imams was not only meant to pray for the successful implementation of the projects, but also to pray for the Gambian leader, His Excellency Sheikh Professor Alhaji Dr Yahya A.J.J. Jammeh, Babili Mansa, for his love and support to Banjul to betransformed into a modern city,” said Mayor Bah.

According to Mayor Alhaji Abdoulie Bah, the key priority areas include the construction of an ultra-modern council complex with all offices inclusive, concrete roads for Banjul, a Centre of Excellence for youths, a new public car park and new abattoir for the city.

He said: “With these structures in place, it will boost the revenue income for the council to able to expand its developmental intervention within the capital city.”

The Mayor disclosed that Banjul City Council would provide the finances and Gamworks would handle and facilitate the work.

Mayor Bah said some of the roads within the capital city will be concrete, for example, Primet Street, Picton Street, Mosque Road, and some other roads will have inter-locked blocks, which has already begun.

He pointed out that prior to the coming of these projects, a Development Task Force was formed to come up with a blueprint and after the completion of their work, Council prioritized areas of development as mentioned above.

He commended the members of the Task Force for the good work during the course of their assignment.

Mayor Bah thanked President Jammeh for his approval of the new projects to commence in the city, noting that the President has the people of Banjul at heart and since the advent of the July 22nd Revolution, the Gambian leader has immensely supported Banjul in its development strives to transform the capital into a modern city.

Ebrima Cham, Director General of Gamworks, described the start of these new projects as historic, adding that Gamworks and Banjul City Council are close partners.

He assured the gathering that Gamworks will leave up to expectations as enshrined in the project documents.

He promised the Council that works on the projects would be completed according to the stipulated timeframe.

Alhagie Alieu Mboge, Secretary of the Banjul Muslim Elders, commended President Jammeh for his support to Banjul, while applauding Mayor Abdoulie Bah and his BCC staff for coming up with such important projects for the city.

This projects if completed will ease smooth motor traffic within the city’s main roads.

Alhagie O.B. Conateh said the people of Banjul are great supporters of APRC government, and are very grateful to President Jammeh for the unflinching developmental support brought to Banjul.

He therefore called on Banjulians to continue to rally behind the Gambian leader and the APRC government.