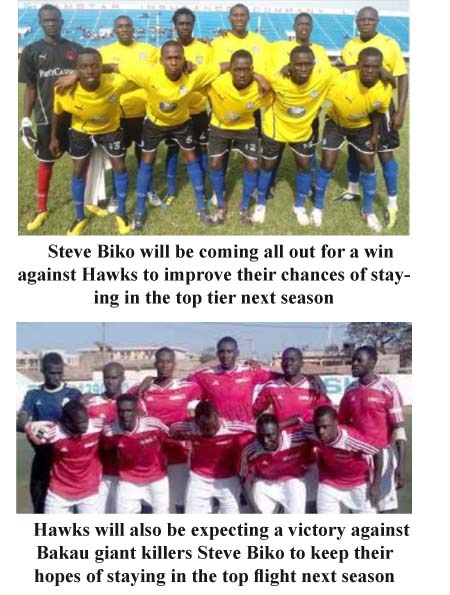 The outgoing Gambia Football Federation (GFF) division one league champions, Steve Biko, will rub shoulders with Hawks in a battle for survival in the country’s premier league today, Wednesday 25 June 2014, at the Banjul KG5 Mini Stadium.

This comes after Real de Banjul were confirmed champions of the 2013-2014 GFF division one league, following their resounding 2-0 win over Hawks in the week twenty fixtures played at the Serrekunda East Mini Stadium at the weekend.

Steve Biko, who lifted the country’s 2012-2013 premier tier title, are currently languishing at the bottom of the summit, with 18 points and two more games to go, and they need to win their remaining two games to fancy their chances of staying in the top tier next season.

They will be coming all out for a win against Hawks to grab the vital maximum three points, and hope teams above them in the league table lose their two remaining fixtures, to stay in the first division next season.

They will be fighting tooth and nail for a victory against former champions Steve Biko, to boost their hopes of staying in the top flight next season, and avoid relegation to the second division.

Armed Forces will play against Samger in another tricky tie at the Brikama Box Bar Mini Stadium. Armed Forces are two places above the red zone, and will be aiming for a win against Samger to improve their position on the league table and avoid relegation to the second division.

Samger are one place above the relegation zone, and will be searching for a victory against Armed Forces in order to avoid relegation to the second tier, and stay in the premier league next season.

On Thursday 26 June 2014, Banjul United will clash with Gamtel at the Serrekunda East Mini Stadium. Banjul United and Gamtel both will be hoping to recover, after losing to Armed Forces and Samger at the weekend, to boost their position on the league table.

Wallidan will be coming all out for revenge, after losing to Real de Banjul 1-0 in the first round, to boost their position on the league table.

Interior, on the other hand, will also be hoping for a win against Gambia Ports Authority to improve their position on the league.