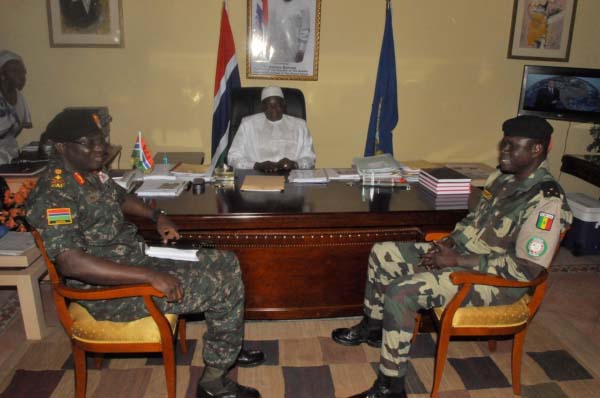 Speaking to journalists after the closed-door meeting, CDS General Masanneh Kinteh said: “We paid a courtesy call on President Barrow, as well as to bid farewell to General François Ndiaye who has been in the country since in the beginning of the mission in January.

And now it is time for him to leave, and he has handed the team to the Chief of Operations, who will continue from where the General left off.”

The CDS added that General François Ndiaye had a very good discussion with President Barrow concerning the security situation within the country and sub-region, and at the same time the state of the mission, ECOMIG, which the General outlined from the beginning to his handing over to the Government of President Barrow.

“The ECOMIG Team has really delivered the mandate they are here for, and they are making sure that the population live in peace and ensure that all the conditions are there for normal business to go on and ensure a free and safe environment for all.”

Speaking to journalists, General François said: “Everything is under control and all people are going about their businesses without hindrance.”

He further clarified the ECOMIG mandate in The Gambia, saying: “The team was given a mandate and the mission was decided and planned in the ECOWAS headquarters in Abuja.  And the provision of the mandate stated clearly that we have to wait and know that the population of The Gambia is safe.”

He added: “ECOMIG will still continue to stabilize the country and to see to it that the people of The Gambia are well secured, and are in good hands before they finally bid farewell to the people.”

Since their arrival in The Gambia, he noted, they had been doing “tremendously well in the protection of the people”, as they continue to uphold their mandate in the country.