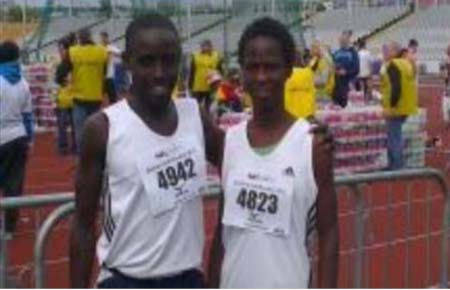 Mariama T. Jallow and Lamin Sanneh both of the Gambia Police Force were on Saturday crowned champions at the Bajana second annual 10km marathon competition.

Likewise in the 5km, which was competed among institutions and diplomats, Fatou Sarr of the GID and Mustapha Jatta of prison department, both took first, as they outmatched other contestants.

The event, competed in both the 10 and 5 km races, witnessed hundreds of people, as the 10km race started from Somita village while the 5km began from Besse village both ended at Bajana village in the Foni District West Coast Region.

The 10km race by clubs and individuals, also witnessed a challenge of diplomats and institutions such as media houses, who took part in the 5km race.

In the 10-km race category, which began from Somita village, the second position was taken by Sohna Saho of the GPF, 3rd by Nyima Marong of Latrikunda UBS, 4th by Bintou Jawara of GPF and 5th by Mariama Gibba of GAF.

Describing the unification of Bajana village, Roy further told participants that they have congress association which raises fund to mould the village development project which built the community nursery school and its water facility.

Applauding the Bajana congress association for its hard work, he expressed hopes for further sustainability of the projects.

Staging the 1st International Bajana Marathon in 2013, he says, the Gambia volunteers association has staged other marathon competitions outside The Gambia with the support of GIA, Gambia Bird and the UK High Commission for Gambian athletics, to compete in Manchester and other countries.

While he further thanked them for the support, he however, appealed for more helping hand to rehabilitate the kindergartens.

UK Deputy High Commissioner George Sheriff thanked the organizers for staging the run and participants for taking part in the competition.

“It is great to participate and we get to make a difference in it,” says the UK Deputy High Commissioner, adding that it was a great opportunity to partake in the marathon and expressed hope of seeing its continuity

US Embassy staff Jana Lewis, who also took part in the 5km run, said she was proud of taking part in the event.

Jana, who got to know about the event last weekend, said that despite the fact that she did not physically train ahead of the event, she however got into it for “participatory sake” and did well.

Niki Shire, a US Peace Corps volunteer, who for the first time took part in the marathon, said it was nice the race was undertaken despite the climate. “It was hard but it was fun,” she said excitingly.