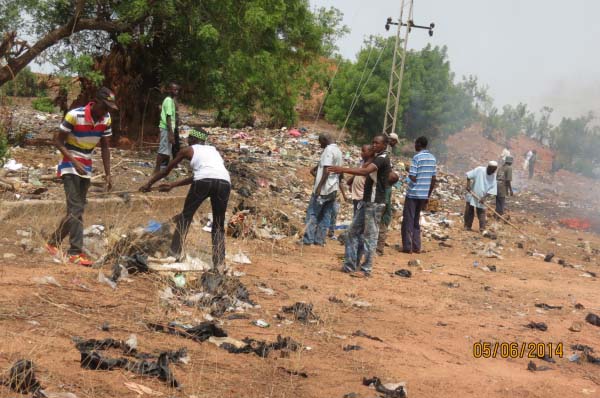 Biodiversity Action Journalist-Gambia Upper River Region (URR) in collaboration with Basse Area Council and other institutions such as the regional forestry office, water resources office, town development committee and a cross-section of the local communities in Basse, gathered to clean Basse major praying ground as part of observing World Environment Day an initiative organised by BAJ-Gambia and supported by Basse Area Council.

The celebration attended by key institutions and local communities was part of BAJ-Gambia’s activities in observance of World Environment Day, according to Abdou Rahman Sallah, executive director of Biodiversity Action Journalist Gambia in an interview with reporters during the exercise in Basse URR.

“In the past we celebrated World Environment Day through match past and speech presentations but this year we decided to celebrate it by taking practical actions as action journalists by organizing massive cleansing exercises not only in Basse but also Soma in the Lower River Region,” he added.

Mr Sallah also talked on the importance of the day, noting that the day was observed worldwide, as a result BAJ Gambia joined the rest of the world to celebrate the day through massive cleansing exercise.

According to Sallah, his organization was committed to compliment government efforts through its relevant ministries and agencies not only through publishing or disseminating information about the environment but take part in practical exercises such as cleansing exercise, tree planting among others.

Biodiversity Action Journalists Gambia is a registered environmental and natural resources media organization founded in 2010 with membership journalists from print and electronic media (bloggers and Community Radios) across the country with the technical support from Department of Parks and Wildlife Management.

The objective was to raise public awareness on the issues affecting the environment in a bid to encourage public participation in the protection and conservation of natural resources (marine and terrestrial) through advocacy to ensure its availability at all time, Sallah said.

The Chief Executive Officer, Basse Area Council, Pa Ansu Ceesay, said the beauty of it all was the fact that BAJ-Gambia themselves initiated the cleansing exercise, which he described as a resounding success taking into account the active participation of the communities and the relevant institutions.

The exemplary action by the organization, he said, serves as an inspiration to other villages.

Ceesay expressed gratitude to BAJ-Gambia for initiating this type of event for the first time in the history of Gambian journalists, noting that it was about time that people take control of their waste and be in charge of their surroundings rather than wait for someone to come and do it for them.

He advised them to stop the war on the environment by cutting down trees, setting bushfires, poor waste management, among others.

Mamadi Sanneh, BAJ-Gambia regional focal person for the Basse region, said the organization’s mission was to advocate for sustainable use of the country’s biological and natural resources to ensure its availability at all times.

Nuha Badjie, chairman of BAJ-Gambia URR branch expressed satisfaction of the level of turnout of the people to participate in the event, which he said, was encouraging.

Mr Badjie also highlighted some of the achievements made by the organization such as capacity building trainings for local farmers, journalists, relevant stakeholders on environmental related issues which had improved the understanding of the people on some of these issues.

Sisawo Sabally of regional forestry said educating the communities on the proper environmental management and bushfires prevention and management was very important in the crusade.

To him, the forest cover was dwindling on a daily bases because of bushfires, illegal logging and other forms of environmental exploitation.