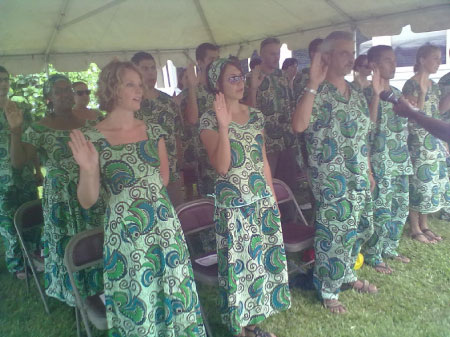 Eighteen American Peace Corps volunteers were on 31 August 2012 sworn in at the US ambassador’s residence in Fajara.

The Peace Corps volunteers would serve the country’s education sector for two-years mostly in the Central and Upper River regions.

The volunteers will serve in schools, World Food Programme (WFP) and the Ministry of Higher Education, Research, Science and Technology.

He urged the volunteers to work hand in glove with their host communities and to transfer knowledge and skills in those areas.

“As education volunteers you work in schools, and help teachers to promote teaching in learning,” Ambassador Maloch said, while commending the Peace Corps for their service to humanity.

“You will be the mirror to which your host community will appreciate the American people,” he told them.

During their time in the country, they are going to be catalyst of change, strengthening the capacity of Gambian teachers as well as improving learning for the Gambian youth, he said.

“As Peace Corps volunteers you are leaders,” he said, adding that trust is most valuable attribute of successful leadership.

He indicated that to be catalyst of change is not easy, because the process is slow as at times “you get frustrated and discouraged”.

Mr Kayero finally assured the volunteers that they are not alone; the Peace Corps staff will strive to give them the support they need and deserve.

Professor Muhammadou Kah, vice chancellor of the University of The Gambia, said he was delighted at the coming of the new educational volunteers.

According to him, he was personally a beneficiary of Peace Corps programme and that it has changed his life.

“The commitment that you have already made to be part of this noble initiative of the US government will touch many more lives that will go on and change the world to be a better place for humanity,” he said.

He said he was optimistic that many will benefit from the experience and knowledge of the peace corpse as they interact and involve in educational activities.

Prof. Kah also urged them to be open-minded, have patience and explore the very rich and profound cultures of The Gambia.