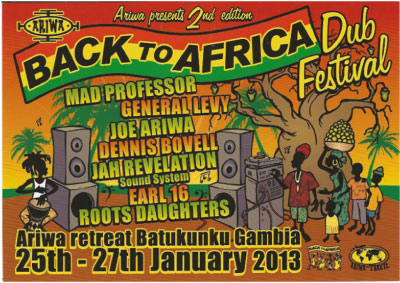 Preparations have already been put in place to have the second edition of Back to Africa Festival staged on 25 through 27 January this year in Batukunku village.

The festival is proudly sponsored by Record Company called Ariwa.

Speaking at a press conference held at Alliance Franco, Oko Drammeh, an international music promoter, said Africans have always been trying to unite themselves and the holding of such a festival would also help in bracing up the communication networks among the people.

“We are using popular Africans who have names to try to increase the momentum of the connection and one of them is Neil Fruzer, who is very instrumental in Africa with his music, Oko said.

It is very important that we take his festival as another milestone given examples like Patrick Bomba, Kwemekruma, because his motive for coming to The Gambia has been a follow-up to see for himself, for so many years musicians have been singing about Africa.

He added that many artistes made themselves manifest in Africa not only through academia but also through music, as well as the art and culture, which is all accepted by every home in Africa, especially in The Gambia.

“Neil has extended his interest in The Gambia through Back to Africa Festival,” he noted.

Mr Drammeh told journalists that Back to Africa Festival is not a tourism festival but a ‘consensus’.

“This is a very important festival and we are doing this every year for not only the Gambians but also in the sub-region in the near future,” the Gambian music veteran said.

Neil Fruzer, aka Mad Professor, who is the brain behind this event, was born in South America in the mid-50s and according to him most South Americans have their origin in Africa.

“As Africans we need to find our roots,” Neil said, adding: “Wherever we are going we are still Africans.

“When we were growing up we were serious about Africa. When we ask our grandparents about Africa they don’t want to talk about Africa; so we have to learn and find out. “What we want to do is go back to Africa whether physically, spiritually or mentally; we have to go back to our culture.”

Message of WHO Regional Director for Africa, Dr Luis G. Sambo on the occasion of World Mental Health Day