The items included foetal doppler with ultra-sound gel used for sounding and detecting whether a baby is alive, detergents for cleaning the ward, television set, satellite disc with a receiver, a wall clock, a water dispenser and bottle, special shoes for the nurses to be using so that they can move comfortably, medicines, and walking aids.

Two baby bowls were also donated for the first born baby boy and girl of the year with D5,000 for each.

Speaking at the ceremony, Pateh Saho, the hospital administrator, said the donation was not a surprise to him since it was not the first time they had received support from the family. He recalled their first donation of items valued at D300,000.

The aim of the Conteh family is to see a healthy nation, he says, adding that their doors are always open to any one who may want to help the hospital.

He also thanked the Conteh family for their support to the hospital.

Speaking on behalf of the Conteh family, Momodou Conteh says they are in partnership with the Kebba Conteh Adopted Maternity Ward and would want to keep it to European standard.

He also thanked the for giving them the opportunity, of supporting the ward.

Amie Ndow, head of the maternity ward, said they were happy to receive the donation, adding that it would go a long way in reducing maternity rate.

Alieu D. Badjie, public relations officer of the hospital, applauded the Conteh family for their continued support to the hospital.

Mr Badjie also urged the general public to emulate the Conteh family to boost the standard of the hospital wards. 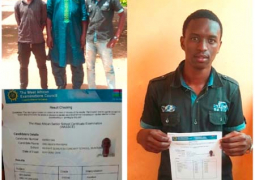 Nusrat student bags 9As in WASSCE