Foday Badgie was said to be the finest boxer in the competition.

The championship was organised by the Gambia Amateur Boxing Association in its quest to promote and develop boxing in The Gambia where participants were derived from various clubs in the country.

In an interview with Pointsport, Alpha Ebrima M. Jallow, treasurer of the Gambia Amateur Boxing Association, said the participants were competitive and determined.

He pointed out that, the discipline was dormant in the past, but they want to revive it in the country.

He added that the championship would qualify three finest boxers to participate in a tournament due to take place in Ireland in September this year.

“We are also preparing for a competition due to take place in Astana in October 2013 organised by the Aiber World championship,” he disclosed.

Jallow called on stakeholders and members of government, the private sector and individuals to help them camp their participants in order to do well in the proposed championships.

According him, on behalf of the association, he was to attend a two-day seminar for referees and judges last weekend in Togo, organized by the Africa Boxing Confederation which was to be represented by members of the African continent.

“We are going to discuss the new rules and regulations that are being implemented by the referees and judges, which need to improve, “he says.

He applauds the president of the association for facilitating his trip to Togo and for supporting the boxers. 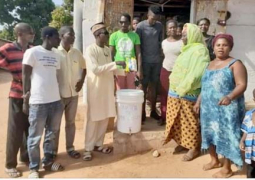