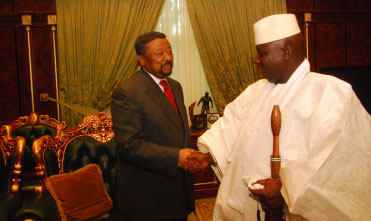 The Chairman of the African Union Commission yesterday evening arrived in for talks with President Yahya Jammeh over the situation in neighbouring Guinea Bissau.

Jean Ping, according to our source, flew in to from Guinea Bissau.

As part of his mission, held talks with President Jammeh on a wide range of issues at State House last evening.

Shortly after his audience with the Gambian leader, the Chairman of the African Union told waiting journalists that, taking into account the situation prevailing in the sub-region mainly that in Guinea Bissau, it is very useful for him to seek advice from President Jammeh who, he said, knows very well the situation in the sub-region.

On what steps the African Union was thinking of taking in Guinea Bissau, Ping said after meeting with all stakeholders in , including the army and international community, he had the impression that the situation in is under control.

“But the real problems are still there. There are many problems, including the reform of the army. We talked about all these issues with them, and I now have a better evaluation of the situation, not only in Guinea Bissau, but the sub-region in general,” he added.

According to him, despite all that it has, the African continent is very unfortunate to have all forms of conflicts.

He also told journalists that the year 2011 is the worst year for the continent, with crises in , , DRC Congo, and .

“We are being confronted with tremendous problems, which we have to solve because you will never have a sustainable development without peace,” added.

The African leaders, he said, think that it is impossible to solve African problems by ignoring the African people.