The ongoing criminal trial involving one Babucarr Njie proceeded on 18th August 2009 before Magistrate Babou Jobe of the Kanifing Magistrates' Court with the testimony of the prosecution witness one Baboucarr Njie.

Testifying, the prosecution witness, one Babou Njie a resident of Kanifing South and a businessman, adduced that he recognized the accused person and can recall 2nd January 2009.

He told the court that, on that fateful day he was working with the accused person in their compound and after the work he gave the accused D100.

He said after giving him the money, he left for to see his uncle, adding that the D100 was for his fare.

He adduced further that the accused requested the keys to the house and he the witness told him that there are materials packed inside the house.

"After a push and pull, a fight erupted between us and after the fight I was standing before one shop to buy something when the accused then came from behind and stabbed me with a knife twice," he told the court.

Still giving his version of the story, Mr. Njie maintained that he was later rushed to in where he was admitted for five days. He added that he then reported the matter to the Kanfiing Police and the accused was subsequently arrested.

It will be recalled that the accused is standing trial for assault causing actual bodily harm.

The particulars of the offence are that the accused Babucarr Njie on 2nd January 2009, assaulted one Babou Njie by stabbing him with a knife twice, thereby causing him actual bodily harm. 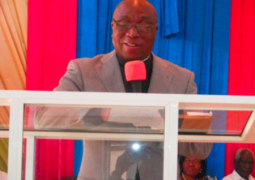