The trial of a case of assault, causing actual bodily harm, involving one Francis Mendy, continued recently at the Brikama Magistrates' Court before Magistrate Lamin Mbye.

Narrating the facts of the case, CPL Sarr told the court that the incident took place on 1 April 2011, at Brikama Bojang Kunda when the complainant and some of his friends went to Sang Mendy's Bar to get some soft drinks.

He said the complainant left his friends, with whom he was sitting and drinking, to go and urinate, and upon the complainant's return, the accused confronted him and subsequently stabbed him in his chest with a broken bottle.

The matter was reported to the Brikama Police Station and the complainant was taken to the Brikama Health Centre and later referred to the RVTH, where he was treated and discharged, CPL Sarr elaborated.

The complainant was issued with an outpatient document, he explained, adding that the accused was later arrested and taken to the Brikama Police Station.

The hearing of the case, at that juncture, was adjourned till 16 May 2011, for the victim to get a medical report from the RVTH. 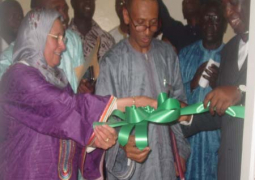