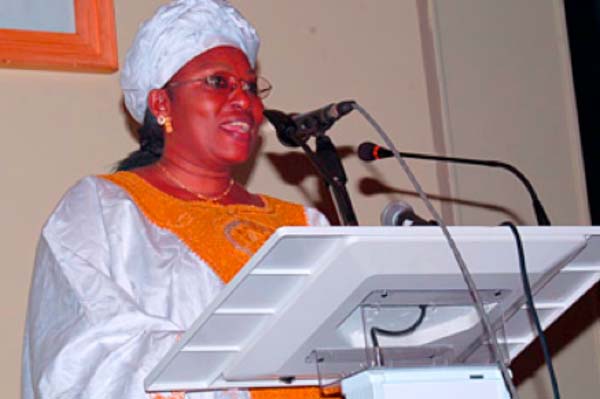 The Gambia yesterday joined the rest of the world in commemorating International Women’s Day with the theme: “Gender Equality and Women’s Empowerment for Sustainable Development”.

The day brought together women from different walks of life who put on white African attire to conduct a march-past led by the police band, held at the Buffer Zone in Tallinding.

The day was set aside to recognise the efforts of women all over the world.  In The Gambia, it was recalled that since the advent of the Second Republic, Gambian women had registered tremendous achievements.

First Lady Zineb Yahya Jammeh, in a statement delivered on her behalf by Fatou Lamin Faye, Minister for Basic and Secondary Education, said she was pleased to be associated with the commemoration of women’s contributions and successes towards national and international development.

The First Lady said development is the key to any thriving and prospering economy, which could not be achieved by any community in the world without the active participation and contribution of women.

“International Women’s Day provides a unique opportunity to recognise and applaud our achievements as women, but most importantly to reinforce the will and the drive necessary to focus on addressing the challenges and hardships that women are still faced with in The Gambia, in Africa and the world at large.”

The First Lady further said the global review of the Beijing Declaration and Platform for Action found progress in the promulgation of laws that promote gender equality and address violence against women and girls.

It was also to provide achievements in girls’ enrollment in primary and secondary education, higher employment opportunities for women, a decline in maternal mortality and increase in women’s access to contraception, and a doubling of women’s representation in national parliaments.

“In this regard, the Government of The Gambia has done a lot in areas of gender-related policies, legislation and programming; as a result, women are now more than ever before participating in decision-making and in politics,” she added.

She said in The Gambia both the Vice President and Deputy Speaker of the National Assembly are women, adding that cabinet ministerial positions responsible for important sectors that have a major impact on the development and progress of any nation “are also handled by women in The Gambia”.

According to her, government had considered it imperative to address these challenges and emerging concerns collectively, and in the spirit of partnership to build on the existing achievements and structures in place, re-strategize to ensure continued and effective women’s empowerment and gender mainstreaming initiatives, at all levels and by all stakeholders.

The First Lady further said the government would also continue to take measures to increase educational attainment and raising participation in labour force with better conditions, prospects for advancement and equal pay.

Also speaking on the occasion was Hon. Fatou Mbye, chairperson of the National Women’s Council, who said development could not be sustained without the support of women, and commended the President, First Lady and the Vice President for their support and selfless service to Gambian women.

She congratulated the National Women’s Council and all partners for making the day a fulfilling one.

Speakers at the occasion included Amie Jatta and KMC Lord Mayor Yankuba Colley, who all spoke at length about the contribution of Gambia women to national development.