Deputies at the National Assembly Thursday enacted The Gambia Anti-Corruption Commission Bill 2012, paving the way for the punishment of public officers alleged to have engaged in unethical conduct.

The bill, tabled before deputies by the attorney general and Minister of Justice, Lamin Jobarteh, seeks to prohibit and prescribe punishment for corruption and other related offences.

It establishes the Anti-Corruption Commission vesting it with the responsibility for investigation and prosecution of offenders.

The bill also provides that any offence committed outside the by a Gambian citizen would be punished as if it were committed in The Gambia.

Provision has also been made for the protection of a person who gives information to the commission in respect of an offence committed or likely to be committed by any other person.

Under the new Act, a person who being a public officer by any willful act or omission, or recklessly causes any loss, damage or injury to the property of a public body, whether monetary or otherwise commits an offence and is liable on conviction to imprisonment to five years.

Also under the new Act, a person being a citizen or non citizen in or outside The Gambia unlawfully deals in any foreign currency in a manner injurious or damaging or in any other way adverse to the economy of The Gambia commits an offence and is liable on conviction to imprisonment for a term not exceeding five years or to a fine of one million dalasis or both.

Among its functions, the Commission is empowered to investigate and recommend to the director of public prosecutions the prosecution of any acts of corruption or other matters prescribed under the Act.

The Commission will also institute and conduct proceedings in court for purposes of recovery or protection of public property, the freezing or confiscation of proceeds of corruption or the payment of compensation or other punitive and disciplinary measures.

In tabling the bill before deputies, Justice Minister Jobarteh said the bill seeks to put in place the necessary institutional framework to spearhead the fight against corruption which, he said, is the main concern as at today of the government and her people in view of what has happened and is happening in our daily lives.

“The bill envisaged that the Commission will be a permanent institution vested with both the powers to investigate and prosecute alleged offenders,” he told deputies. 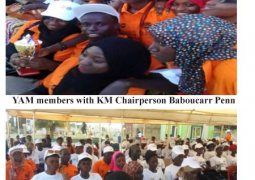