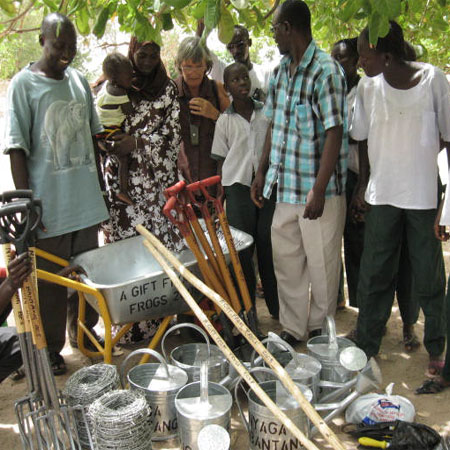 During a three-day trip up country, the FROGS team of Sally and Malcolm Reader visited the Basic Cycle School at Nyaga Bantang, CRD. The couple had previously visited the school in 2007, when the Headmaster, Mr. Alsana Manneh had appealed for help with their gardening project. The school had nothing in the way of gardening tools and the pupils borrowed from villagers when attending to their plots.

Speaking at a brief presentation ceremony at the school, Madam Reader expressed their pleasure in helping the school.

She hoped that the tools will make the garden easier work and a more fruitful place.

The garden master, Pa Wally Ndinbalan said the tools would not only help the students in their gardening but would also help them in learning.

In another development, Bijilo Lower Basic School is twice blessed by FROGS assistance.

During a recent visit to her local Lower Basic School, Sally Reader, FROGS co-ordinator, was approached by the Headmaster, Mr. Kebbeh Fatty to help the school further and provide a new roof and chimney for the school kitchen.

The chimney had been damaged by youths playing football on a neighbouring field and the roofing sheets were worn out.

As the rainy season was fast approaching, FROGS moved rapidly and within 10 days the job was completed.

Not a moment too soon, as less that one week later the first rains hit Bijilo.

Fortunately for Bijilo LBS they can now continue providing lunches for their pupils, the feeding programme was instigated by FROGS in May 2007 and sustained by the school management.