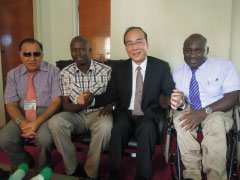 The Hon. Deputy Minister of Presidential Affairs and Secretary General, and Head of Civil Servants of the Office of the President at the time, Madi Jatta, recently received, on behalf of the Government of The Gambia, from H.E. Samuel Chen, Ambassador of the Republic of China (Taiwan), a cheque for US$180,000, which is payment to help in the provision of tuition fees and stipends for 6 Gambian medical doctors in Ghana.

Mr Jatta lauded the gesture and commended the Taiwanese government for its continued support to The Gambia.

He noted that the assistance would contribute immensely towards the development of the medical sector.

Presenting the cheque, H.E. Samuel Chen, Ambassador of the Republic of China (), acknowledged the strong bilateral cooperation between The Gambia and , saying the donation reflects ’s commitment to the development of The Gambia.

The purpose of the donation, he said, is to help The Gambian Government in their quest for medical excellence.

He said he hopes that when the students complete their studies, they will return to contribute to the medical development of The Gambia.

Ambassador Chen reiterated his resolve to further consolidating ties between the two countries.