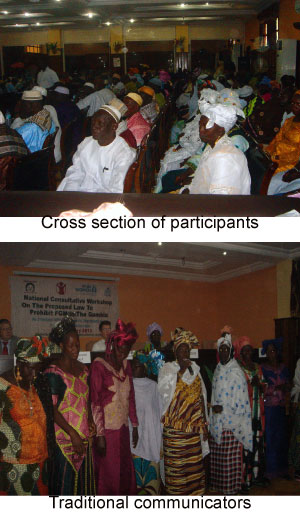 The Gambia Committee on Traditional Practices Affecting the Health of women and children (Gamcotrap) yesterday convened a national consultative forum and dialogue on the proposed bill to prohibit the practice of female genital mutilation (FGM) in the country.

The interface withcross section of community representatives from across the country supported by Save the Children International and UN Women was held at the Paradise Suites Hotel.

In her welcome statement at the event, Dr Isatou Touray, Executive Director of Gamcotrap, said the high turnout of diverse representations of people at the workshop is unprecedented thus a manifestation of their commitment to the advancement of Gambian women and girls in the drive to ensure a protective environment for them.

According to her, Gamcotrap is a leading women’s rights grassroots NGO that promotes the rights and wellbeing of women and children.

“Part of our mandate is to fight against all forms of harmful traditional practices that are inimical to the sexual and reproductive health and rights of women and girl child,” she said.

She added that The Gambia Government has promoted the rights of women and children and is one of the first 25 countries to have ratified the United Nations Convention on the Rights of the Child (UNCRC).

The country also ratified the African Charter on the Rights and Welfare of the Child (ACRWC) and the Convention of all forms of Discrimination against Women (CEDAW).

The country has also signed many other Conventions and Protocols geared towards protecting women and girls thus extends appreciation to the Gambian leader for the achievements, she said.

“Over the past two decades, we have been engaged in constructive dialogue in raising public awareness on the effects of female genital mutilation and building consciousness on international instruments governing the protection of women; particularly those instruments ratified by The Gambia,” she remarked.

According to Dr Touray, the advocacy for a law reform has been ongoing since 2005 with policymakers and the legislature to be aware of the need to protect children and women from the effects of FGM.

She reveals that most of the communities are empowered with information to recognize the need to protect their women and children.

“This has led to the dropping of the knife ceremony, a public declaration made by 98 circumcisers and 564 communities from 2007 to 2011,”she said.

She also said the current proposed bill is a true reflection of communities and not the handiwork of Gamcotrap as it is as a result of the emerging issues coming from the people through their interactions with them.

“Today’s consultation is possible through the guidance of the National Assembly who observed that the people should be consulted and validate the document and then they would act on the wishes of the people,” Dr Touray said.

For her part, Madam Fatou Kinteh, a representative of UNFPA country office, applauded the efforts of Gamcotrap and other NGOs in championing the cause of women and children.

Female Genital Mutilation or Cutting is among the deep-rooted traditional /cultural practices held by members of some communities for very long years, often spanning generations, she said.

She revealed that the 2010 Multiple Indicator Cluster Survey (MICS) report of The Gambia notes that the practice of FGM/C is predominant among the Mandinka, Jahanka, Sarahuleh, Jola, Fula and Aku Marabout.

Fatou Kinteh told the audience that the proposed draft bill to prohibit FGM/C in The Gambia is a result of several years of trainings, sensitizations and awareness creation conducted throughout the country.

Amadou Cham, a program officer from the Women’s Bureau, said women continue to face numerous challenges in many parts of the African continent.

He spoke at length on the efforts made by the country towards protecting women and girls.

chief of mission, Tommy Jones, and deputy British High Commissioner George Sheriff hailed the efforts of Gamcotrap and assured the NGO of their continued collaboration.

“FGM concerns the whole world. Protecting the rights and wellbeing of women and children is a top priority for both EU and the British High Commission,” says George Sheriff.

The implementation of a law in prohibiting FGM is a step in the right direction, Mr Sheriff added.