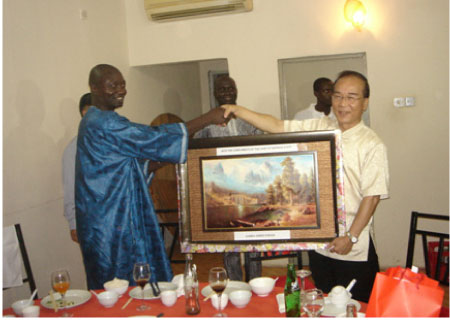 Activities making the 101st national day of the Republic of China on Taiwan continued to gain momentum in The Gambia with a dinner hosted by Ambassador Chen for members of the Gambia Armed Forces, GAF.

The dinner attended by top brass of the army and other military officers was held on Thursday 4th October 2012 at the Wonderful Chinese Restaurant on Kairaba Avenue.

Speaking at the dinner, the Taiwanese ambassador to the Gambia, Samuel Chen, said it was a pleasure for him to host the members of GAF to a dinner.

The ambassador said that the Republic of China on Taiwan passed through a difficult political history, but is today proud of its achievements.

He spoke about the bilateral cooperation between The Gambia and Taiwan, and announced that next year three high speed navy boats would be delivered to the country.

Harry Sambou, permanent secretary at the Ministry of Defence in Banjul, congratulated the Taiwanese community in The Gambia on their national day, and thanked ambassador Chen for the special dinner organized for them.

According to him, Taiwan was one of the fist countries in the world to recognize The Gambia since gaining independence in 1965.

He said that was why when President Jammeh came to power in 1994 he decided to re-establish diplomatic relations with ROC in 1995.

“For us as a country, we are advocating for the fair treatment of the 23 million people of Taiwan, and we would continue to push for that agenda,” he said.

The chief of defence staff of the GAF, Lt.General Ousman Badjie, made similar remarks while acknowledging the support the ROC is giving to the country.

He thanked the ambassador for organizing a special dinner for the GAF team, and all those who took part in their friendly football game.

“As His Excellency always says, the size of a country doesn’t matter but it is about which the country and her people are capable of doing,” he said.

He added: “Taiwan and The Gambia are all small countries, but both have witnessed rapid development over the years, and we would continue to collaborate.” 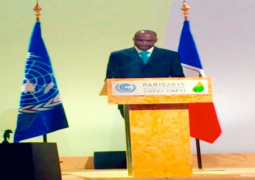