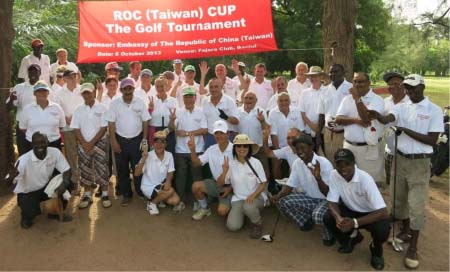 The ambassador of the Republic of China on Taiwan, H. E. Samuel Chen, extends his regards and congratulations to ambassadors, representatives and golf participants who took part in the just concluded ROC (Taiwan) Golf Cup tournament held at the golf course in Fajara at the weekend.

The tournament, organised and funded by the Taiwanese embassy in celebrating the 102ndRepublic of China (on Taiwan) national birthday(10 October), brought together diplomats, NGOs, members, MDs and eight outstanding Gambian golfers among others.

During the event, a total of 39 participants got divided into 13 groups from whom the winner happened to be David Costello, the Ambassador of Qatar Mohammed Al-Kraabi and Julie Woods each of whom went away with a cup and baskets of goodies. And each of the teams went away with a prize as a token for their participation.

In a release issued to The Point, H.E. Ambassador Samuel Chen thanked all the participants reiterating that the tournament was not about winning but about “meaningful participation” on the basis of friendship.

“We are eager to share the friendship and love with those who are living on this land and all friends who work for the people of The Gambia, particularly,” Ambassador Chen said.

“I know that many of you are volunteers and true friends of The Gambia. The golf tournament can provide us a platform to curdle the strength of our friendship.”

He also reiterated Taiwan’s commitment to the development of The Gambia, particularly in health, agriculture, education and infrastructure.

Ambassador Chen thanked Fajara club committee members for helping to organize the event successfully and congratulated all the winners, wishing everyone a “wonderful and enjoyable” time.

The golf tournament’s coordinator Captain Susanne Lanfermeijer thanked the ROC (on Taiwan) Embassy for their initiative to organize and sponsor such an event.

“I hope that everyone here had a great time and I hope that there will be more tournaments like this in the future,” she said.