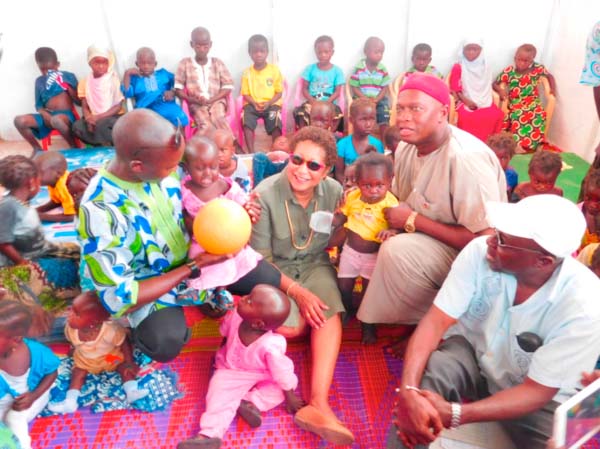 The United States Ambassador to The Gambia, C. Patricia Alsup, on Monday April 25 inaugurated two child welfare centers in Beeta and Upart communities in the Foni area of the West Coast Region.

The centres are two of six child welfare centers built by the Gambia Food and Nutrition Association (GAFNA) through a US$25,000 grant from the Julia Taft Refugee Fund’s (JTRF).The U.S. Embassy awarded the grant to GAFNA last year.

The Julia Taft Refugee Fund is meant to fill critical funding gaps in a country’s major refugee programmes.From 2012 to 2015, the Fund has contributed $100,000 to support refugees from the Casamance.

The Fund provides vulnerable women and children with livelihood improvement projects so they can rebuild their lives.

In her remarks, the Ambassador said she was proud of the U.S. Embassy’s involvement in this significant contribution to the wellbeing of refugee children and their host families.

She mentioned that when we speak of young children care and education cannot be realistically separated, given that children learn through play.They learn even more when they receive quality care.

“The benefits of quality early childhood education and care, as I’m sure you are aware,are numerous: You can place your child in these centres, and be quite certain that they are safe and well cared for, by people who are trained and qualified,andthat these caregivers share an understanding about what is important for your child.”

The Ambassador underscored that when individuals are denied opportunities to reach their maximum potential, not only are they harmed individually, but the entire community suffers.

She believes this occurs largely because our communities depend so heavily on skilled and productive labour forces.

“By ensuring that both your children, and you yourselves, seize this opportunity to reach your full potential, you are making a significant contribution to the future development of your community as a whole.”

She added: “Although education and the acquisition of skills is a lifelong process, an early start in life is crucial.If the first few years of a child’s life include support for healthy family and community development, the child is more likely to succeed in school and to contribute to society as an adult.Without that early support, a child is ultimately more likely to drop out of school, earn lower wages, or depend greatly on family members.”

Commenting further, Ambassador Alsup said in the devastating context of global conflict and displacement, education gives hope to refugee children and their families to envision and build a secure future.

She said her government appreciates that education for refugee children and young people is a critical aspect of the United Nations High Commission for Refugees’ (UNHCR) international protection mandate.

“Education, we know, contributes to long-term solutions for refugees, ensuring that displaced generations are equipped to rebuild their lives and communities - either in the country of asylum, upon their return to their homes, or on resettlement in another country.

“We know that 50 percent of the refugees hosted in The Gambia are under 18 years of age.The majority of these children are very young; pre-school age.The need to educate these young people has never been more urgent.

“For this reason, the Embassy Banjul is happy to support this project, ‘Improving early childhood welfare for refugee and host children,’ initiated by the Gambia Food and Nutrition Association (GAFNA).”

The Ambassador seized the opportunity to thank GAFNA for coming up with this innovative project, and for the hard work and diligence they have demonstrated in giving refugee children the opportunity to access early childhood education and care.

Ambassador Alsup also reminded the beneficiaries that their continued participation and involvement is key to making this venture a success.