However, the case was mentioned and adjourned to 23rd October 2009, for plea-taking and possibly for the hearing to commence.

The presiding Judge, Justice Moses Richards ordered the prosecution to file all the necessary processes before the next adjourned date, and serve the Defence for the case to commence.

It could be recalled that, the accused Bubacarr Tunkara, was first arraigned at the Kanifing Magistrates' Court on 15th September, 2009, before Senior Magistrate Abdoulie Mbacke for an alleged murder.

The charge sheet at the Magistrates' Court stated that, on 6th September, 2009, at Kairaba Avenue, in the Kanifing Municipality, the accused murdered one Ahmat Iseri, a Turkish national by stabbing him with a knife.

Journalist Chief Ebrima Manneh Still Missing, Who Is Holding Him? 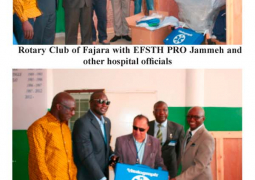